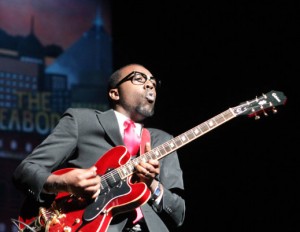 Mr. Sipp, “The Mississippi Blues Child,” is the alter ego of gospel guitarist Castro Coleman. One of the hottest new names in the blues world, Mr. Sipp made his debut on Malaco Records in 2015.

Castro Coleman was born in McComb, Mississippi, on August 25, 1976, and started playing guitar as a young child. Coleman recalls, “I was born a musician. Music was in my life from the moment I arrived; both of my parents were in singing groups and played some type of instrument. It’s just a natural part of me.” Early on he played in several gospel groups and later took a role behind the scenes playing on more than 50 gospel recordings while also learning the role of producer and honing his skills as a songwriter and entertainer.

Never one to be pigeonholed musically, in 2013 Mr. Sipp was born and launched himself into the blues world. Sporting a look anchored by thick, black glasses with a piece of tape around the nose brace, this performer can deliver the goods, and his live shows were immediately hailed as “passionate and energetic.” Mr. Sipp’s first months as a performer were chaotic but rewarding. “We competed in [the International Blues Challenge in] 2013 and at the time I was a month old. Me and my guys had only been doing the blues for a month. We signed up for the regional challenge, had never done a blues show, won first place there, and made it to the IBC finals, didn’t win the finals, and I was encouraged to come back.” In 2014 he did just that, again winning the regionals but this time actually winning the top prize at the annual International Blues Challenge held by the Blues Foundation in Memphis. He also won the 2014 Gibson Best Guitarist Award, the 2014 Jus’ Blues Foundation’s Bobby Rush Entertainer’s Award and the 2015 Jackson Music Awards Blues Artist of the Year.

The Mississippi Blues Child released his first album in 2014 on his own label. The release garnered praise, heralding Mr. Sipp as an exciting newcomer. Living Blues said, “A good number of younger-generation blues artists have emerged from Mississippi in recent years to show that the torch is still being carried and Castro Coleman demonstrates here that he’s a full-fledged member of that up-and-coming fraternity.”

Coleman, who was already under contract with Malaco for his gospel recordings, began to work on a new CD. The Mississippi Blues Child was released in the spring of 2015 to rave reviews and debuted at No. 6 on the Living Blues Radio Chart. The magazine praised Sipp’s music saying, “No matter the style, though, Mr. Sipp is up to the task, again proving himself worthy as singer, guitarist and songwriter.”

Mr. Sipp’s popularity has exploded, making him one of the most popular acts on the blues scene today. He is touring heavily including recent performances at the Chicago Blues Festival, the Crescent City Blues and BBQ Festival and the Legendary Rhythm and Blues Cruise, as well as tours of Europe, Brazil and even China.