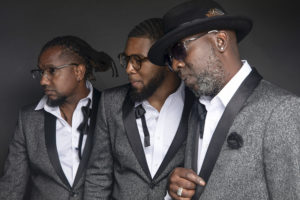 Blues enthusiasts know Castro Coleman as Mr. Sipp, an artist who has garnered several awards as a musician and for his 2015 Malaco release, The Mississippi Blues Child. Gospel fans, on the other hand, know Coleman as the leader of the True Believers, a quartet that seamlessly blends traditional and contemporary quartet singing styles.

Born August 25, 1976, in McComb, Mississippi, to Jonell and Vera Coleman, Castro Coleman traces his gospel music roots to singing in his aunt’s group, Grace King and the Mellonettes. His guitar playing, however, was inspired by listening to blues great and fellow Mississippian B.B. King.

In addition to playing blues, Coleman organized the True Believers, a gospel quartet that released its first disc, Don’t Count Me Out, for Blackberry Records in 2000. The album featured songs written by Coleman as well as compositions by Paul Porter of the Christianaires, Bishop Hezekiah Walker and Melvin Williams of the Williams Brothers.

Comparisons to the Canton Spirituals and the Williams Brothers were not surprising to the True Believers because Coleman was a musician for these two groups, among others. In fact, it was Coleman’s work with these Malaco artists that brought him to the attention of company executives. Impressed, Malaco signed the True Believers and in 2007 reissued Home With Family and Friends in CD and DVD formats as In This Place.

Break Through, recorded at Dream Maker Studios in Magnolia, Mississippi, came out the following year, propelled by the buoyant single, Everything I Need.

Besides the True Believers, Coleman led Castro Coleman & Highly Favored. The quartet’s 2008 disc, Against da Grain!!!!, includes a vocal assist from Doug Williams on Grace and Mercy and Aundre Tate on In Your Presence. Time Out!!!, the group’s 2009 release and an early title on Malaco’s 4 Winds imprint, opens with Quartet Heaven, an evocation of deceased quartet singers, such as Frank Williams, Willie Neal Johnson and Robert Blair, singing together in “Hallelujah Square.”

In 2018, the True Believers were named Group of the Year at the 40th Mississippi Gospel Music Awards. Their most recent single, Waiting on Jesus, was released on 4 Winds in October 2018.

In February 2019, The True Believers, led and produced by Castro Coleman are back with their new release “Back to the Roots” under the MALACO Records. They will be touring all over the country so don’t miss them !!!

The Sounds We Grew Up On Credits