The Gospel According to Malaco: Celebrating 75 Years of Gospel 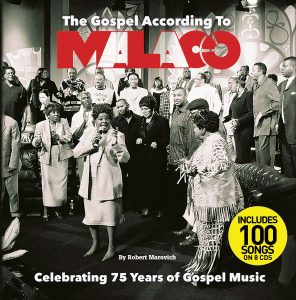 The Malaco Music Group has amassed the largest black gospel catalog in the world. Their new collection The Gospel According to Malaco: Celebrating 75 Years of Gospel Music in an unparalleled book and eight cd set which tells the story of gospel music over a seventy-five year period from the post-war years to the present. This is the first time this story has been told in size and scope, providing the history behind one of the most important genres in music. The compilation offers a number of hit recordings along with numerous musical treasures just waiting to be discovered. The collection includes Mahalia Jackson, Sister Rosetta Tharpe and Rev. James Cleveland, along with other notable artists such as The Gospel Keynotes, Solomon Burke, The Caravans and The Mississippi Mass Choir. This set is also one of the first, if not the first, to explore in depth the mass choir phenomenon that not only dominated gospel radio from the mid-1970s to the early 1990s but also produced many of today’s top-selling songwriters, soloists and musicians. Renowned author and researcher Robert Marovich tells the stories of the 100 recordings contained in the eight CD anthology.

From the Inside Flap

In the spring of 1943, an a cappella male gospel quartet called the Kings of Harmony cut the first of many sides for the new King Solomon Records, a subsidiary of Savoy Records, itself a newcomer specializing in the emerging sounds of bebop. Unbeknownst to the quartet or to Savoy at the time, they were kickstarting what would become one of the most important catalogues of recorded gospel music ever amassed under one roof. This eight-disc, 100-track collection from Malaco Music Group takes you on an aural journey through the past eight decades of African American gospel music. Each disc contains some of the most beloved gospel recordings ever made, rendered by the singers, duos, groups, quartets, and choirs who popularized them. From Mahalia Jackson and Roberta Martin to the Jackson Southernaires, the Mississippi Mass Choir, and Maurette Brown Clarkno other package offers so much variety. Thats because only the Malaco Music Group has access to so much gospel variety. This box set is also one of the first, if not the first, to explore in depth the mass choir phenomenon that not only dominated gospel radio from the mid-1970s to the early 1990s but produced many of todays top-selling songwriters, soloists, and musicians. Naturally, a collection of such scope cant help but showcase the many stylistic changes that took place in gospel music during the past 75 years. But the 100 selections also demonstrate what hasnt changed: gospels unwavering commitment to cultural relevance and its focus on remaining resilient in this mean old world in which we live. And when in doubt or trouble-laden, Calvin Bridges writes, you can go to God in prayer. Whether you are a lifelong gospel music enthusiast or taking your first deep dive into the music of hope and inspiration, this collection is for you. As the Reverend Clay Evans would say, may it bless you real good!

Robert M. Bob Marovich is a gospel music historian, author, and radio host. Gospel Memories, a radio program of classic gospel, spiritual, and jubilee music, airs on Chicagos WLUW-FM and throughout the week on Internet, low-power FM, and terrestrial radio stations. The radio program received a commendation from the African American Museum of Philadelphia and in 2017 earned Bob a Gospel Image Award. It was named Best Gospel Radio Show of the Year by the Rhythm of Gospel Awards in 2018. Bob writes about classic and contemporary gospel music as Editor-in-Chief of the Journal of Gospel Music (www.journalofgospelmusic.com). The website, formerly known as The Black Gospel Blog, was nominated for a Rhythm of Gospel Award in 2013 and 2018. In 2016, Bob became the host of Conversations with the Gospel Legends, a 30-minute video series featuring discussions with prominent Chicago gospel legends, for the PCC Broadcast Network. He appears in the documentary How We Got Over (One State Films) and has been interviewed for several other documentaries in production. Bobs work has been published in the Encyclopedia of American Gospel Music (Routledge 2005), Encyclopedia of African American Music (Greenwood Publishing 2010), and in the ARSC Journal of the Association for Recorded Sound Collections. His article on Chicago choirmaster Professor J. Wesley Jones was published in Chicago History in 2017. He wrote album notes for Sallie and Cora Martin: Just a Little Talk With Jesus (Gospel Friend 2014), The One-Derful! Collection: Halo Records (Secret Stash 2016), Moving Up: The Gospelaires of Dayton, Ohio (Gospel Friend 2017), and a various artists project, Jesus Rocked the Jukebox (Concord Music Group 2017). He is a major contributor of brief biographical sketches of Malaco / Savoy gospel artists for the Malaco Records website and has authored the album notes for the forthcoming Malaco 50th Anniversary Box Set. Formerly second vice president of the Chicago Area Gospel Announcers Guild (Gospel Music Workshop of America) and board member of the Rhythm of Gospel Awards, Bob is currently on the board of the Chicago Gospel Music Heritage Museum. He is a member of the Stellar Awards Gospel Music Academy, the Recording Academy, the Center for Black Music Research, and the Association for Recorded Sound Collections. Marovichs collection of gospel sound recordings is cited as one of the nations most comprehensive. It includes more than 6,000 records and thousands of CDs and cassettes representing tens of thousands of individual selections. His first book, A City Called Heaven: Chicago and the Birth of Gospel Music, was published in March 2015 by the University of Illinois Press as part of its Music in American Life Series. It received a 2016 Certificate of Merit in Historical Sound Recorded Research from the Association for Recorded Sound Collections. It was named one of the best nonfiction books of 2015 by the Chicago Book Review. Bob graduated cum laude from the University of Notre Dame in 1985 and earned an MBA from the Lake Forest Graduate School of Management in 2002. He lives in Chicago with his wife, author and educator Laurel Delaney, and their two cats.