Pastor Terrell Rogers and Men Of Destiny – “Stand By Me” Out Now! 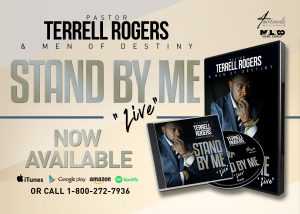 Terrell Rogers is no stranger to the Gospel music industry and he comes from a lineage of great performers. His aunt, Barbara Rogers-Mitchell was a former member of Kirk Franklin’s God’s Property choir and Terrell played drums in a group with his uncle Tim Rogers and his group The Fellas.

Rogers and company have been steadily gaining traction with their unique blend of classic quartet harmonies with contemporary vocal arrangements and production. They are the new generation of the illustrious quartet legacy and they are taking things in a new direction.

The debut album Stand By Me, featuring the lead single of the same name is available everywhere. He is also currently on a 17-city tour to promote the project. After releasing the official video for the lead single “Stand By Me”, Rogers racked up over 15,000 views in only three days. He has also made a considerable impact on mainstream radio, which is uncommon for the quartet genre.

Help us to welcome and introduce this immense talent to the 4 Winds Family!

Stand By Me (Official Video): https://youtu.be/6EBUeucVkiM