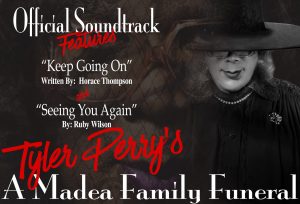 Tyler Perry’s A Madea Family Funeral was released on Friday March 1st and once again the Malaco Records catalog makes an appearance. Our illustrious collection of Gospel music has been tapped for the use of the good people at Tyler Perry Studios on a number of their projects.

Malaco Records has two songs from out extensive catalog featured the latest film from Tyler Perry, A Madea Family Funeral. The first featured song was performed by The Sensational Nightingales and written by one of their founding members, Horace Thompson. The song is called “Keep Going On” and it’s an uplifting quartet tune that’s inspiring and entertaining.

The second featured song is Ruby Wilson’s “Seeing You Again”. A smooth love ballad that is sung perfectly by Wilson’s sultry vocals. It’s a song about reconnecting with a lost love. Wonder how it fits into the film.

Check out the film and listen out for the song!