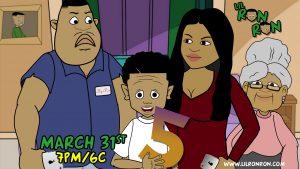 “We are delighted to be partnering with Ron and Brandon. We believe these young men have done a fantastic job in producing the web series, “Lil Ron Ron” and that this is yet another important milestone for Malaco,” said Tommy Couch Jr., President of Malaco Records.

This new partnership with Bush and Reed is unique to Malaco’s history of working with music artists and will open doors to the label branching into different entertainment platforms.

“It’s been an experience. I chose ‘Lil Ron Ron’ because I see a lot of potential and growth. It took a few weeks, but we made it happen and we’re all here”, said Maalik Miles, Marketing Director at The Malaco Music Group.

“This means the world to us. Our fans are the reason we are here and we appreciate all of our supporters”, said Mobile, Ala. native, Ronald Bush, who is creator and co-writer of the series and voice of Lil Ron Ron.

“To be doing this with a company that has the pedigree that Malaco has means a lot. Our followers may be too young to understand the impact Malaco has had on the entertainment industry, but we are so excited to be working with them and I believe it’s a match made in Heaven”, added Pryme Reed, a Mobile, Ala. native and co-writer of the series. Reed is also the voice of Rev. Lemme Hol A Dolla, a recurring character on “Lil Ron Ron.”

Lil Ron Ron now has his own Instagram account, @TheRealLilRonRon, so fans can keep up with the character through photos and snippets of the show. All episodes of the series can also be found on the Lil Ron Ron Animated Series YouTube channel.

“It’s amazing to work with people who love this show as much as we do. Just wait. You thought the other seasons were good, but season five is the best one yet. I can’t express it enough”, said Brandon Reed, “Lil Ron Ron” animator and South Bend, Ind. native.