A twister swept through central Mississippi April 15, 2011, damaging parts of the Clinton and northwest Jackson area. The tornado managed to strike Malaco Records along with several businesses and homes. It destroyed Malaco’s accounting building and shipping warehouse. The main building, which housed executive offices and a recording studio also suffered damage. The 20 employees who were at work when the tornado struck managed to escape injury and Malaco’s thousands of master tapes weathered the storm in a vault-type building made of concrete blocks and steel.

Label president Tommy Couch Jr., engineer, Wolf Stephenson, and several other employees were on the premises that morning. 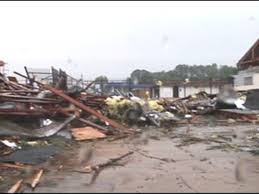 “The [warning] sirens just kept going off,” recalled Stephenson. “It was not uncommon for us to hear them sounding and just go outside and look, but they kept going off this time. I was sitting at the console working on [a recording by] Carolyn Traylor. Someone came running down the hall and said, ‘The sirens are going off again and they are saying a tornado was sighted on Flag Chapel Road, about four or five miles across the woods from us.’ Knowing that the common track of these tornadoes moves from southwest to northeast, we were pretty close,” said Stephenson. 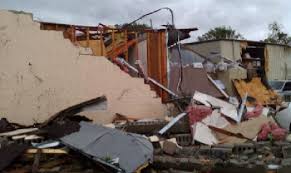 “I sat down on a cased opening between the old studio building and a metal building that had been converted into offices. Everything came apart in 30 seconds. It sounded like someone had a shop vac and was picking up glass and nails and they were all swirling around inside the shop vac. Debris was hitting the building from the outside and then there was a roar. Then all the power switches and breakers on the outside started exploding and the roof started coming off. It was pitch dark and all of a sudden it was light again for maybe a second [as the roof lifted up and turned about an inch] and then it was dark again. There was tremendous noise going on the entire time. It was chaos. Cars demolished all over the parking lot” Stephenson continued.

Prior to the tornado, a distribution deal had been worked out with Warren Campbell’s My Block Records for Kelly Price’s 2011 album, Kelly. The street date for the record was two weeks after the tornado hit and Malaco didn’t miss a beat through the chaos of the storm. In fact, within a week of the tornado company employees were busy working the album. At the end of the year, it was nominated for a Grammy, while the single from the album, “Not My Daddy,” garnered two Grammy nominations.

By the middle of the next week, Malaco had set up offices at the Fondren Plaza on State Street and the company’s phones were up and working. By July 2012 new offices and a new studio had been built on the old site.

Eight years later, the company has completely rebuilt and is continuing to expand its brand. Malaco has celebrated 50 years in the music industry and recently partnered with popular YouTube series, “Lil Ron Ron” under a partnership titled B&R Animation LLC. The label has also had music featured in Tyler Perry’s A Madea Family Funeral and Oprah Winfrey’s Greenleaf. The label is also working with rising artists Christina Bell and Darius Paulk. To learn more about Malaco’s work, visit www.malaco.com/category/news/.