James D. Robinson, Jr. Is Being Inducted Into The Stellar Awards Hall Of Fame 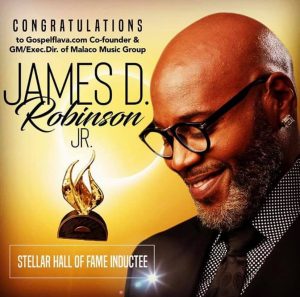 Our very own Executive Director and General Manager, James D. Robinson, Jr., is being inducted into The Stellar Awards Hall Of Fame. Robinson is also the co-founder of the popular Gospel music news source and media outlet, Gospel Flava.

Robinson, a 20 year veteran executive, spent more than eight years working his way up the ranks at eOne/Light Records, going from an A&R executive to head of A&R; eventually being promoted to Senior Vice President, as well as GM of the label, where he strategically signed acts like James Fortune & FIYA, Coko, JJ Hairston & Youthful Praise, Jessica Reedy and Jonathan McReynolds.

In his current role as Manager of Malaco Gospel/Savoy Records, Robinson has the responsibility of signing new acts to the label, as well as offer exclusive publishing deals to songwriters through the legacy label’s publishing arm.