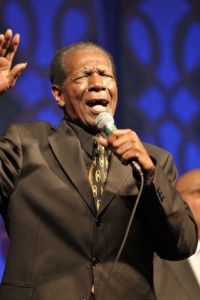 With a voice that evokes the soulful crooning of Sam Cooke and Johnnie Taylor, Willie Rogers is the last of a long legacy of lead singers for the Soul Stirrers.

Rogers was born in Norfolk, Virginia, on February 3, 1938. His father was a member of Norfolk’s Floodgates Quartet, a group that had a 15-minute radio broadcast every Sunday. One Sunday, seven-year-old Willie was invited to sing with the Floodgates on the broadcast. “The phone lit up,” Rogers remembered. “People called in from everywhere wanting to know who was this little boy singing.” Thereafter, Rogers traveled throughout Virginia singing with the Floodgates and participating in the gospel programs the quartet organized in Norfolk. He had a chance to sing alongside many of the era’s most respected quartets, such as the Soul Stirrers, whose lead singer, Sam Cooke, was an inspiration to the young Rogers.

Around 1957 or 1958, Spencer Taylor and the Highway QCs participated in a Norfolk gospel program with the Floodgates. Impressed with Rogers’ singing, the QCs invited him to join their group. Rogers eagerly accepted—while the Floodgates were regionally popular, the QCs were nationally recognized recording artists. Like an apprentice, Rogers learned the craft of professional singing while traveling with the QCs.

Drafted into the army in 1962, Rogers served his country while winning army singing contests. By the time of his 1964 discharge, Rogers felt he had outgrown the QCs so he returned to Norfolk to consider his next move. It was not long before J.J. Farley of the Soul Stirrers invited Rogers to replace Johnnie Taylor, who had left the Stirrers to pursue a solo career in R&B. Rogers joined the Stirrers around 1965 and recorded for the first time with the group that same year, leading I Know I’ll Be Free.

In the early 1970s, Rogers tried his hand as a soul music vocalist. Despite the fact that some of his records on Ronn, a subsidiary of Jewel Records, were produced and arranged by the legendary Johnny Pate, Rogers never saw his pop career take off. “I didn’t have the feeling for it,” he admitted. Rogers returned to his gospel roots by rejoining the Soul Stirrers, where he and Martin Jacox traded lead vocal responsibilities with the same electricity that marked Paul Foster and Sam Cooke’s exchanges with the Stirrers in the early 1950s.

Rogers has spent the rest of his career with the Soul Stirrers. He was present when the quartet was inducted into the Rock and Roll Hall of Fame in 1988. The 1980s also saw Rogers and the Stirrers perform in The Gospel at Colonus, a musical reworking of Oedipus at Colonus.

Willie Rogers and the Soul Stirrers continue to perform, albeit with new personnel. The Soul Stirrers Reunion for Malaco (2008) teamed Rogers with Stirrers alumni Arthur and LeRoy Crume, Eddie Huffman and the Reverend Luther Gamble. Rogers joined some of his contemporaries for the 2015 Malaco CD and DVD, An Evening with the Legends of Quartet Live. A highlight of the presentation was Rogers’ duet with Spencer Taylor on the perennial gospel favorite, When the Gates Swing Open.