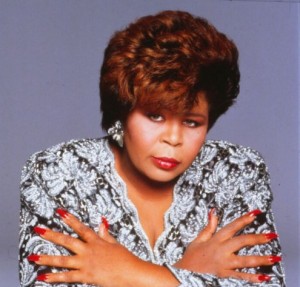 As a teenager growing up in Detroit during the 1960s, Vanessa Bell Armstrong, like so many other up-and-coming gospel singers, found herself caught in a tug of war between spiritual and secular ambitions.

She was born in the Motor City on October 2, 1953, and started singing in church when she was four. She began her recording career at age 13 as the soloist on I’m So Glad, a song on a 1967 album for Savoy Records by Mattie Moss Clark’s Southwest Michigan State Choir, but by the time she reached high school, she was singing Aretha Franklin tunes in talent shows. She lost every time.

“I thought I was Aretha,” she recalled. “I guess the Lord knew that if I had gotten any kind of recognition for singing that stuff, I probably would have tried to sing that, but that’s not what He chose for me to do.”

It would be another 16 years before Armstrong made another record. She had married shortly after graduating high school, had five children and spent the 1970s as a housewife. Then, in 1980, her husband decided to finance a demo tape that eventually led to a contract with the Nashville-based Onyx International label.

“He told me I had too much voice to be just singing around the house and going to my father’s church on the weekend to sing,” she explained.

Armstrong’s first Onyx International album, 1983’s Please Be Still, was produced by the innovative Detroit gospel keyboardist, arranger and songwriter Thomas Whitfield. It made her an immediate sensation in gospel music circles. It was a mixture of traditional and contemporary gospel material, as was the following year’s Whitfield-produced Chosen.

“High emotion coupled with an impeccable sense of phrasing made the albums inspirational masterpieces,” Cleveland Plain Dealer critic Edward Hill wrote. “Her syllables forge brilliantly through octaves, tugging at even the most disbelieving hearts.”

Just as Armstrong’s star was ascending, Onyx International folded. In 1986, the Muscle Shoals Sound label issued a third Armstrong album, Following Jesus, made up of selections from her previous two releases, in addition to songs produced by Walter Hawkins that were once rejected by Onyx International. The album was not as successful as its predecessors. (Songs from all three albums are available on her Greatest Hits CD.)

Her career at a standstill, Armstrong moved to Tulsa, where her sister was singing on television evangelist Richard Roberts’ program. After appearing on Broadway in the cast of Don’t Get God Started, she settled in Atlanta in 1988. By that time, she had a new contract with Jive Records, a London-based company that specialized in hip-hop and such “boy bands” as New Kids on the Block.

Vanessa Bell Armstrong, her late-1987 Jive debut, caused confusion among her gospel fans. Not only did it utilize the latest funk beats, but also the religious content of many song lyrics seemed unclear. “God” or “Jesus” became “you” or “him.” Much of the material on her second Jive album, 1990’s Wonderful One, was similarly ambiguous.

“It’s unclear whether the object of her affection has divine or earthly origins,” a reviewer for the Memphis Commercial Appeal observed at the time. “The production methods and sound of this LP make rumors of Armstrong’s impending switch from gospel to secular music seem both logical and necessary.”

Armstrong denied at the time any plans to go pop. The songs in question, she said, were supplied to her by Jive’s producers, and, in an effort to make their meanings clearer, she interjected phrases like “Oh, Lord” during sessions. To her surprise, however, she found that such phrases had been deleted from he final mixes.

She even scored a couple of minor R&B chart hits: You Bring Out the Best in Me in 1987 and Something on the Inside in 1993. In subsequent recordings for Verity, Tommy Boy and EMI Gospel, however, she was able to make the Christian content of her songs more obvious.

“A lot has changed and Armstrong has stood her ground, emerging with a work that is the perfect summation of gospel’s rich history and its cutting-edge presence in the mix of today’s R&B music,” Billboard magazine said in a review of the 1998 Verity album Desire of the Heart: Live in Detroit. “It took a while, but the world seems to be catching up to Armstrong.”