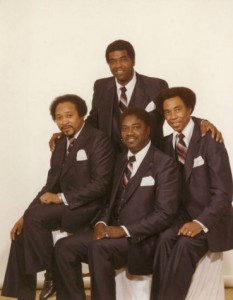 Anyone who knows anything about gospel music knows about the Sensational Nightingales. Nicknamed “The Gentlemen of Song” and also known simply as “the Gales,” the Sensational Nightingales originated as a Philadelphia quartet called the Lamplighters, which included guitarist Howard Carroll (later of the Dixie Hummingbirds) and tenor singer Jerome Guy. In 1949, Carroll and Guy, following the era’s penchant for naming vocal harmony groups after birds, changed the group’s name to the Nightingale Quartet.

Barney Parks, a founding member of the Dixie Hummingbirds, became the Nightingale Quartet’s manager. By this time, the group consisted of Carroll, Paul Owens, Ben Joyner and William Henry. They toured with Sister Rosetta Tharpe, sang on radio and, in 1949, cut their first records for the Coleman label in Newark, New Jersey.

At first, the Nightingales sang in the rhythmic jubilee style which was popularized by the Golden Gate Quartet. This changed in 1950 when Parks recruited Julius “June” Cheeks of Spartanburg, South Carolina, to be the Gales’ lead singer. Quartets were transitioning from jubilee to gospel-influenced singing, which meant incorporating a hard-singing lead vocalist. To remain relevant, the Nightingales needed someone who could shout like Archie Brownlee of the original Five Blind Boys or Wilmer Broadnax of the Spirit of Memphis. A force of nature in vocal prowess, Cheeks was the ideal choice.

After a short stint recording for Decca, where they released singles of their own and also backed gospel singer Marie Knight on hers, the group, now billed as the Sensational Nightingales, signed with Peacock Records in 1952. Personnel consisted of Cheeks, Ernest James, Bill Woodruff, John Jefferson and guitarist Joseph “Jo Jo” Wallace. This iteration commenced a string of hits that spanned the 1950s and 1960s, such as Somewhere to Lay My Head, See How They Done My Lord, On the Judgment Day, Morning Train and Burying Ground, which Nightingales biographer Opal Louis Nations calls “one of the finest moments in recorded quartet history.” James and Cheeks handled the majority of the lead work, wrecking churches and auditoriums along the gospel highway when they traded leads on a song, such as on 1952’s Will He Welcome Me There.

Cheeks left the Nightingales in 1960 and formed his own quartet, the Four Gospel Knights. Several top singers auditioned to take Cheeks’ place, and in the end, Charles Johnson of the Gospel Consolators was invited to be the new lead. Johnson, steeped in the older jubilee style, led the group for its next 20-plus years of touring and recording.

When Peacock Records went out of business and after a brief stint with MCA, the Nightingales signed with Malaco Records. Their Malaco debut was 1980’s All About Jesus. At this point, the group consisted of Johnson, Wallace, Woodruff and Horace Thompson. Johnson remained with the Nightingales through 1981’s Saints Hold On and 1982’s He Is Real before leaving to form his own group the Revivers, with Darrell and Ricky Luster.

Calvert McNair replaced Johnson on the group’s succession of Malaco albums during the 1980s and 1990s. Continuing the smooth stylings introduced to the group by Charles Johnson, the Nightingales, including veteran members Jo Jo Wallace and Horace Thompson, recorded nearly 20 albums for Malaco, including hits Freedom After a While (1987) and A Message From the Book(1991). I Surrender All (1984) stayed on the Billboard Top Gospel Albums chart for two months.

In 1999, Darrell Luster, who worked with the Nightingales in the 1980s, became the group’s producer. Two albums later, Luster was a bona fide singing member of the group. A Luster-produced album for Malaco, Songs to Edify, featuring the single I’m Blessed, earned the quartet a Grammy nomination for Best Traditional Soul Gospel Album. Luster led the group on its 2007 Malaco release, The Gales. That same year, the group made its first-ever national television appearance when they were guests on Jeff Majors’ TV One show, The Gospel of Music.

The Sensational Nightingales have appeared at programs and festivals in Switzerland, Germany, France, Austria, the Netherlands, Belgium and Tunisia. They toured Africa and in 1983 served as Ambassadors of Goodwill for the Arts American Program of the U.S. Information Agency. They were the first group inducted into the American Gospel Quartet Convention Hall of Fame.