The Mighty Clouds of Joy 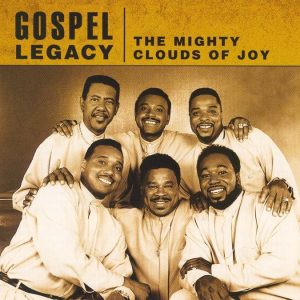 One of the most successful and best-known gospel quartets of all time, the Mighty Clouds of Joy has remained relevant by integrating the latest musical styles with Biblically inspired messages.

The quartet was formed in the mid-1950s as the Sensational Clouds of Joy when Johnny Martin, Elmo Franklin (b. October 8, 1936), Richard Wallace and Willie Joe Ligon (b. October 11, 1936) met while attending Los Angeles’ Thomas Jefferson High School. Although Ligon was not initially selected to be the group’s lead singer, his abilities made way for him. On the Cloud’s first known recording, a circa 1956–57 single for the Los Angeles–based Elko label, Ligon sings lead on Build Me a Cabin in Glory.

Appearing on gospel programs throughout the Los Angeles area, the Clouds caught the attention of Brother “Duke” Henderson, an R&B musician turned gospel radio personality, record company owner and religious retailer. Starting in 1956, Henderson recorded some of the group’s Los Angeles church performances for his new Proverb label, including a 1958 program on which Ligon led Lord, You Woke Me Up This Morning (all of the released and unreleased Proverb sides were later collected on a HOB Records LP). The quartet, then known as the Mighty Mighty Clouds of Joy, benefited from Henderson’s penchant for showcasing selections from his Proverb Records catalogue on his radio show.

In 1960, a demo recording of the Mighty Mighty Clouds of Joy’s Sinner’s Confession found its way to Don Robey, president of Peacock Records. Peacock was, at the time, the premier record company for gospel quartets. Signing to Peacock widened the Clouds’ exposure via radio and personal appearances. Now known simply as the Mighty Clouds of Joy, the group enjoyed a decade-plus run with Peacock with such gospel radio hits as Family Circle (a.k.a. Will the Circle Be Unbroken), Glory Hallelujah, He’s Able, Call Him Up, Heavy Load, Been in the Storm So Long and Did You Stop to Pray This Morning. They crisscrossed the country on touring packages consisting of the nation’s top quartets.

The Mighty Clouds of Joy incorporated the growls, shouts and declamations of African American preachers into their singing. The group also impressed audiences and congregations with their dazzling uniforms and choreography. In this, they emulated quartets such as the Dixie Hummingbirds and vocal harmony groups like the Temptations, whose tailor they frequented. Some even called the Clouds “The Temptations of Gospel.”

The Mighty Clouds of Joy stuck with the traditional gospel quartet format until the mid-1970s. To keep up with changes in popular music, they brought in the hit-making production team of Gamble and Huff to fashion a more contemporary style. The result could be heard on the singles Time (1974) and the disco-flavored Mighty High (1975). The decision perplexed gospel music enthusiasts who thought the Clouds had sold out, but it ultimately proved to be a wise decision. Their new sound earned them an appearance on Soul Train, making them only the second gospel group to perform on the popular television program (the Staple Singers were the first). Mighty High became their biggest hit of the era, rising to No. 2 on the Billboard Dance Chart and introducing a new generation to the group.

The Mighty Clouds of Joy played top venues such as Carnegie Hall, Madison Square Garden, Radio City Music Hall and the Apollo Theater. They sang in the White House before President Jimmy Carter. They made many trips overseas to appear before appreciative audiences in Europe and Asia. Top-name artists such as Aretha Franklin, the Rolling Stones and Paul Simon invited the group to tour with them.

The Clouds won back-to-back Grammy Awards for Best Traditional Soul Gospel Performance in 1978 and 1979 for the albums Live and Direct and Changing Times, respectively. They won a third Grammy in 1991, a Best Traditional Gospel Soul Album statue for Pray for Me. Their embrace of contemporary gospel music helped pave the way for groups such as Commissioned, with two of its lead singers—Fred Hammond and Marvin Sapp—achieving solo success.

A 1996 album, Live in Charleston, recorded at the Abundant Life Tabernacle AME Zion Church, signaled the Clouds’ return to their traditional gospel roots. In 2005, with the group consisting of Ligon, Wallace, Ron Staples and Mike Cook, they recorded the Sanchez Harley–produced In the House of the Lord—Live in Houston (EMI Gospel). Subsequent albums included Movin’ (EMI Gospel, 2007), At the Revival (EMI Gospel, 2010) and All That I Am: Chapter One (MCG Records, 2013). In 2008, the Clouds received the BMI Trailblazers of Gospel Music Award.

Joe Ligon, the longest remaining member of the group, died on December 11, 2016, two months after his 80th birthday.