The Brooklyn All Stars 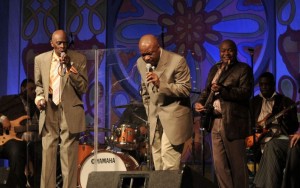 A relationship with New York gospel promoter Joe Bostic helped Storey land the All Stars a regular spot on Bostic’s weekly radio broadcast over WLIB. The quartet also appeared on gospel music programs hosted by Thurman Ruth and Professor Alfred Miller. But by 1956, Storey found it difficult to manage the Brooklyn All Stars and his furniture business at the same time. He turned the rights of the All Stars name over to Spann, who repopulated the quartet with three members of the Singing Stars of Louisburg, North Carolina: lead tenor Hardie Clifton, his brother Maurice Clifton and Nathaniel Cook.

The Brooklyn All Stars first recorded professionally in February 1958 for Peacock Records. By this time, the quartet was comprised of Spann, Hardie Clifton, Nathaniel Cook, Jake Holman, Herbert Robinson and Eddie Lester on guitar. Their Peacock singles, including Careless Soul and Singing for the Lord, sold well enough to earn the quartet a national touring spot alongside gospel household names the Dixie Hummingbirds, Soul Stirrers and Sensational Nightingales.

In the early 1960s, Spann and Harold Austin, owner of the Gospel Bookstore of Brooklyn, formed the Gospel Recording Company, under which the All Stars released singles and their first LPs. By this point, quartet veteran Paul Owens had joined the group, as did Sam Thomas, a former member of the original Charlie Storey All Stars.

In 1967, Sullivan Pugh of the Consolers introduced the All Stars, which now included the Reverend Sam Taylor, to Ernie Young of Nashboro Records. The group began a prodigious recording career with Nashboro. Between 1971 and 1978, while recording for Nashboro and Jewel, the All Stars were consistently voted the number one gospel group on the basis of hits such as No Cross, No Crown, Brightly Beams, Family Prayer and the best-sellers When I Stood on the Banks of Jordan and He Touched Me and Made Me Whole. The group earned two gold albums and numerous music awards.

The All Stars recorded for a number of labels in the 1980s, including Atlanta International Records, and took their traditional sound to ports of call throughout the world. They eventually moved their headquarters from Brooklyn to Greensboro, North Carolina, setting up shop where quartet singing is especially cherished.

Now recording for Malaco’s 4 Winds imprint, the Brooklyn All Stars have released Just Look at Me Now (2011) and Live in Richmond, Virginia (2013), on which they reprise some of their most popular hits in addition to new songs such as I Found a Friend, Get in the Way to Get It and Pray Right On. Thomas Spann continues to lead the quartet in its seventh decade of touring, recording and ministering.