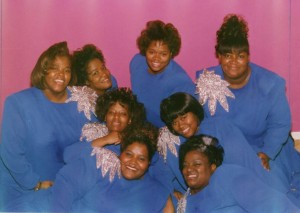 Take the cherubic close harmonies of the Ward Singers in their prime, add the muscular and evangelistic singing of the Davis Sisters, throw in the contemporary flair of the Clark Sisters and you have the Anointed Pace Sisters.

Born in Atlanta’s Poole Creek community to Murphy and Bettie Ann Pace and brought up in the Church of God in Christ (COGIC), the Stellar- and Grammy-nominated Anointed Pace Sisters are comprised of nine sisters: Latrice, Tarrian LaShun, Melonda, Duranice, Phyllis, Dejauii, Leslie, Lydia and June. The sisters began singing in church, in local talent shows and in COGIC national conventions, where in the 1970s they won Best Gospel Group. They also toured nationally with their uncle, evangelist Gene Martin, as part of his Action Revival Team. It was while working with Martin that the Pace sisters learned the ins and outs of the gospel music business.

As the Anointed Pace Sisters, the ladies made their first recording for Atlanta’s Faith label. They came to the attention of gospel powerhouse Savoy Records on the heels of LaShun’s 1991 debut solo album for Savoy, He Lives. LaShun’s vocal performance on In the House of the Lord with Dr. Jonathan Greer and the Cathedral of Faith Choir for Savoy in 1990 so impressed the company that it signed her as a solo artist. The following year, Savoy brought the Anointed Pace Sisters aboard and released U-Know. The album produced several popular songs, including Be a Fence, a reworking of Jesus Be a Fence Around Me, written by Sam Cooke and originally recorded by the Soul Stirrers. U-Know was a mainstay on Billboard’s Top Gospel Albums chart, reaching No. 2 and remaining on the chart for more than a year. The sisters’ next Savoy release, My Purpose: Live in Atlanta (1995), also made Billboard’s Top Gospel Albums chart. The Anointed Pace Sisters were the focus of national attention.

At this point, LaShun was the Anointed Pace Sisters’ signature voice, so when a series of management and booking complications sidelined the group temporarily, she continued her solo career, waxing a series of albums for Savoy between 1993 and 2004. In 2004, she signed with EMI Gospel and recorded It’s My Time.

The Anointed Pace Sisters returned to the recording studio in 2004 with It’s Already Done for their own Gospel Pace imprint, then joined Dr. Leonard Scott’s Tyscot Records, where in 2006 they released the appropriately titled Return. The follow-up, Access Granted (2009), produced the radio single If I Be Lifted Up. The latter two CDs returned the group to the Billboard Top Gospel Albums charts, with Access Granted reaching No. 5, the highest position the group had reached since the 1990s.

In January 2015, the Anointed Pace Sisters were honored at the 16th Trailblazers of Gospel Music Awards, held in their hometown of Atlanta. Gospel luminaries Dorinda Clark-Cole, Z’iel, the Walls Group, Lisa Page Brooks and Tasha Page-Lockhart were among those at the event who sang a medley of Anointed Pace Sisters hits, including Be a Fence, God Is in the Building and Safety Zone, in a moving tribute to the group’s longstanding history.