Tammy Edwards and The Edwards Sisters 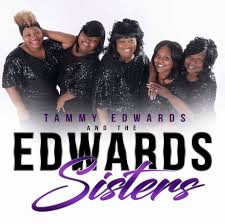 Hailing from Greenville, North Carolina, the Edwards Sisters, led by the vivacious and hard-singing Tammy Edwards, have been offering down-home gospel music for more than 30 years.

Their debut release was the product of a live recording at Greenville’s Mt. Calvary Free Will Baptist Church. The appropriately titled Live came out in 1997 on Vital Records and was re-released by Silverwolf Records in 2006. The selections on Live reappeared on a Silverwolf two-CD set called Best of Black Gospel (2007) and a three-CD set called The Gospel Anthology (2009). The family quartet’s second original release, 2004’s Push, featured selections with fellow gospel singer Greg Logins and came out on First Lite Records.

Around 2011, the Edwards Sisters signed with Malaco’s 4 Winds imprint, a subsidiary created to offer a national platform to quartets making significant local and regional noise. The ladies’ first 4 Winds release was another live album, On the Right Road Now. Released in March 2012, the album was recorded at Greenville’s Sycamore Chapel Baptist Church and produced by Ray Braswell Jr. It produced the popular Help Is on the Way and the energetic Let Us All Go Back, and peaked at No. 35 on the Billboard Top Gospel Albums chart in June of that year. The CD secured the quartet a 2012 television appearance on BET’s Bobby Jones Gospel, where they delighted Jones and his studio audience with a perspiration-drenched version of Let Us All Go Back.

The 4 Winds follow up to On the Right Road Now was a combination CD/DVD project titled Live. It hit retailers at the end of July 2015, with Only Temporary and the drive-tempo We Need Jesus becoming the fan favorites. That same year, the Edwards Sisters contributed Jesus Is the Reason for Malaco’s holiday sampler, A Malaco Christmas.