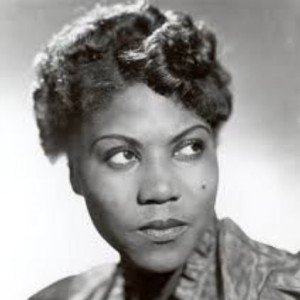 One of the most influential gospel artists of all time, Sister Rosetta Tharpe turned the electric guitar into an instrument of praise. In the process, she became an international gospel artist, broke down barriers for women in instrumental music and was among the first to alert major record companies to the power and popularity of gospel singing.

Born Rosetta Atkins on March 20, 1915, in Cotton Plant, Arkansas, Rosetta was raised in the Church of God in Christ (COGIC). She and her mother, an evangelist named Katie Bell Nubin, moved to Chicago in the 1920s. There they sang and played spirituals and hymns on street corners and at “Fortieth,” the city’s largest COGIC church, pastored by Bishop William Roberts. Rosetta accompanied her mother on guitar and mandolin, two instruments that were unusual for black women of her era to play. Her ability to pluck individual notes at a quick tempo to fill pauses between lyric lines caught the attention of many who came to Fortieth just to hear her.

In 1934, Rosetta married Thomas J. Tharpe, a COGIC minister, and the couple eventually moved to South Florida, where they ran revivals at Miami Temple COGIC. The marriage did not last long. By 1938, Rosetta had taken her talent into venues such as the Cotton Club, where she became part of the Harlem club’s famous revue.

Rosetta made her first records for Decca in October 1938; one, Rock Me, was a version of Thomas A. Dorsey’s Hide Me in Thy Bosom. Her version drew ire from the Father of Gospel Music, who felt gospel songs were not designed for anything but holy dancing. Her Cotton Club performances were disparaged by churchgoers who believed a sacred singer should not appear in nightclubs. Nevertheless, music impresario John Hammond selected Rosetta to help represent sacred music at his 1938 From Spirituals to Swing concert at Carnegie Hall. She was the subject of a Life magazine article in 1939, cementing her status as gospel music’s first big star.

Rosetta moved effortlessly between sacred and secular. She was a vocalist with orchestras led by Lucky Millinder and Benny Goodman, but continued to sing and play guitar in COGIC churches. She was one of the only black religious musicians to cut V-Discs for the war effort, and she appeared on the Armed Forces Radio Service’s Jubilee broadcasts.

One of her biggest gospel hits came in late 1944, with Strange Things Happening Every Day. This Decca recording, accompanied by Sammy Price and his jazz combo, reached No. 2 on the Hit Parade. From that point forward, Rosetta stuck strictly to Christian musical fare, though her electrifying guitar picking would influence future rock ’n’ roll guitarists.

Rosetta teamed up with vocalist Marie Knight of Newark, New Jersey, in 1946. Among the duo’s gospel hits were Didn’t It Rain and Up Above My Head. Rosetta’s 1949 rendition of White Christmas hit No. 8 on Billboard’s R&B Hit Singles chart and earned her and the Rosettes a coveted spot on CBS Television’s Supper Club with Perry Como on January 1, 1950.

On July 3, 1951, Rosetta married Russell Morrison in a public ceremony held in Washington, DC’s Griffith Stadium. A packed house of more than 25,000 fans watched as celebrant Reverend Samuel Kelsey joined the two in matrimony, followed by a gospel program that included singing from quartets as well as from Rosetta and the Rosettes. The Decca recording of the ceremony was one of gospel music’s first live records. The following year, Rosetta made history again when she waxed a duet with Clyde “Red” Foley, a white country singer.

In 1957, Rosetta embarked on a tour of Europe, where she performed alongside Chris Barber’s Jazz Band. Because several future rock performers attended Rosetta’s concerts, some consider her English appearances to have helped ignite the flame of the 1960s British Invasion.

Rosetta suffered a stroke during the early 1970s and then lost a leg due to diabetes. A second stroke took her life in Philadelphia on October 9, 1973. Despite making a good living as a gospel artist, Rosetta was buried without a headstone. In 2008, a group of enthusiasts raised the money to place a marble headstone on her grave, thus giving the musical trailblazer the proper tribute. Three years later, the Pennsylvania Historical and Museum Commission placed a historical marker outside 1102 Master Street, her former home in North Philadelphia. Her life has been feted on audio and video documentaries in the Unites States and for the BBC in Britain.

Professor Gayle Wald of George Washington University published in 2007 the first and only biography on Rosetta. Shout, Sister, Shout!, named for Rosetta’s 1941 hit single, has recently been turned into a stage musical.