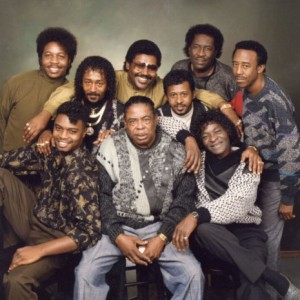 Well into their seventh decade of activity, the Violinaires were formed in Detroit, Michigan, in 1952 when Willie Banks of the Evangelist Gospel Singers of Alabama moved to the Motor City and met Isaiah “Lil’ Shot” Jones, Wilson DeShields and Leo Coney. Seeking to organize a quartet in the style of the Evangelist Gospel Singers, the foursome added Providence Thomas of the Singing Sons and began appearing locally as the Violinaires. Arthur “Bob” Beatty, another early member of the group and also known for his work with the Heavenly Gospel Singers and Sensational Nightingales, told radio announcer Marc Lindy in 2006 that the Violinaires got its name from seeing an image of a bass violin on the front cover of a music book.

The Violinaires’ first single, the hauntingly mournful Another Soldier Gone, was recorded by Detroit music entrepreneur Joe Von Battle in 1953 and leased to the local Drummond label. The single introduced even more listeners to Lil’ Shot’s hair-raising falsetto voice when a year later, Los Angeles-based Swing Time Records released the track for the R&B market, under the nom de plume of the Question Marks.

Perhaps emboldened by the crossover popularity of Another Soldier Gone, the Violinaires tried their hand at singing R&B. The quartet, now consisting of Jones, DeShields, Coney and Calvin Fair, newly recruited from the L & N Gospel Singers, recorded two discs as the Gales for Von Battle’s J-V-B label in 1955. Neither record attracted significant notice at the time. Another link in the chain between the Violinaires and R&B was added in 1957 when a young Wilson Pickett briefly joined the group. Pickett’s lead on Sign of the Judgment for Gotham Records presaged the shout-style singing he would employ on his 1960s soul hits, such as Mustang Sally.

The Violinaires’ recording career took off after they signed with Checker Records in 1964. Some of the group’s hits from their Checker period, most notably Old Time Religion, Stand By Me, If We Never Meet Again and Three Pictures of the Lord, remain in its repertory a half-century later. By this time, a reconstituted Violinaires, with Jones, DeShields and Coney as the anchors, introduced Robert Blair as its newest lead singer. If Blair’s high tenor evoked the falsetto of “Lil’ Shot,” his ability to sing with a preacher’s intensity ensured that the quartet would remain relevant in an era when hard-singing quartets dominated gospel music. The group’s penetrating treble harmonies made such an impact on the genre that gospel quartets emulate it today.

As the 1960s were known as the Violinaires’ Checker era and the 1970s its Jewel Records era, the 1980s became the quartet’s Malaco era. The group, rebranded as the Fantastic Violinaires, recorded for Malaco from 1983 to 1988, with Blair, Dwight “Tito” Arthur, Robert Arrington, David Battle, Dr. Frank “Daddy” Thompson Jr. and David “Bunker Hill” Walker as anchors. Their Malaco albums included The Fantastic Violinaires Featuring Robert Blair (1983), Talk to Jesus (1984), and Today is the Day (1985). The group recorded for Malaco again in the new millennium, most notably in 2013, when it released Reunited Live in Richmond, Featuring Lil’ Blair for Malaco’s 4 Winds imprint.

The Violinaires have sung in churches, festivals, concert halls, and civic centers, and with sacred and secular artists alike—from Pastor Shirley Caesar to the Manhattans. The quartet even inspired the Rolling Stones’ Mick Jagger and Keith Richards to write songs for them.

Robert Blair remained the group’s leader until his death on March 19, 2001. Other longtime members included the Reverend Charles Brown, who wrote the group’s 1950s classic Tell Mother There Will Be No Separation Now. Brown returned to the Violinaires roster in the 2010s, but passed away in October 2013.