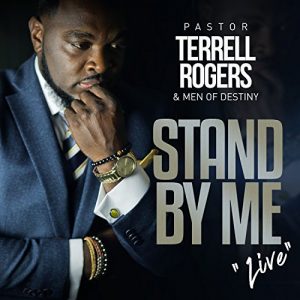 Pastor Aaron Terrell Rogers was born May 19, 1984 in Osceola, Arkansas to Hazel Mays. Raised in Blytheville, Arkansas, he confessed his love for Jesus at the very young age of 10 at Prince of Peace Church. He was raised by his grandparents, the late Bishop T.J. Rogers and Prophetess Tallie Ann Rogers. He is married to his manager, NaShaunna Rogers and fathers Terrell (16), Ky’lan(13), Anyia(12), Aaron(11), Chance(10), Eliah(5), Josiah(2), and Aaryn(5 mths). Pastor Aaron Terrell Rogers accepted his calling to preach June 2007 and was ordained to preach March 2008 under the leadership of his uncle, Pastor Tim Rogers. Growing up, he was always musically inclined and longed for the word of God. He played the drums behind his uncle for the Stella Nominated group, Pastor Tim Rogers & the Fellas. Even as a musician, Terrell longed for more and was dedicated to reaching God’s people. In May of 2010, he decided to leave the group and create his own. He gathered local singers and musicians from his hometown and created the group, Pastor Terrell Rogers & Men of Destiny. His background singers include Ky’lan Rogers, Robert Mays Jr., and Joshuwa Anderson who also plays the keyboard. Paul Johnson plays the drums. Precious Wilson plays the bass guitar. Jeremy Miles plays the keyboard. For the past six years, they have traveled across the country singing and ministering the word of God. In November 2012, Terrell recorded his first cd in a live recording in his hometown. He released his first album November 2013 entitled, “I’m Still Here”. His album includes hits such as, “Count Your Blessing”, He’ll never Say No”, and “I’m Still Here”. His album was produced by his aunt, Barbara Rogers-Mitchell from God’s Property. Terrell was soon discovered by Darrell Luster of 4Winds/Malaco Records in 2016 and became a member of the record label in 2017. He recorded his first album with Malaco September 30, 2017 and it is set to release February of 2018. Terrell’s chief goal is to remain a God-fearing man and travel the country spreading the word of God. He pastors Prince of Peace Church in Blytheville, AR. For booking or contact information, contact NaShaunna Rogers at (870)-278-8865. Mail: Pastor Terrell Rogers & Men of Destiny; 825 Melody Lane; Blytheville, Arkansas 7231. Email: nashaunnarogers@yahoo.com . pastorterrellrogersandmenofdestiny.com