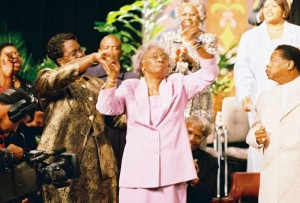 With a life story suitable for a screenplay, Mosie Burks was born on June 17, 1933, into a large migrant farming family in Forest, Mississippi. As a child, she helped her parents pick cotton to make a living, but she was delivered from fieldwork after she kept passing out from the intense Mississippi sun. Early on, she drew inspiration from the singing of Mahalia Jackson and guitar-toting evangelist Sister Rosetta Tharpe—so much so that she took up the guitar at age 12, playing for her local Church of God in Christ.

Burks moved to Jackson, Mississippi, as a young adult, and cleaned houses to raise money to attend Jackson State University. Her higher education plans were shelved, however, when her mother died at age 40, and her father left several of the family’s youngest children in Burks’ care. She worked as a maid to take care of her siblings. In her mid-20s, Burks married, started her own family and reprised her higher education aspirations by studying voice at Tougaloo College. Once again, tragedy interrupted her education pursuit when her husband was the victim of a hit-and-run accident and became seriously ill, requiring healthcare for years (he died in 1984). She returned to the workforce, gaining employment with the South Central Bell Telephone Company. Her singing was relegated to Jackson churches, where she became a popular soloist.

Frank Williams tried to recruit Burks to join his Mississippi Mass Choir, but she wasn’t interested. She was looking forward to retiring from the phone company and traveling the country with her new husband, Willie, whom she married in 1992. After Williams died in 1993, his widow, Katrina, persuaded Burks to join the choir, in part by offering Willie a spot selling choir merchandise during their tours so the Burks could travel together. Mosie’s voice, honed from decades of fiery church singing, was ideal. She became the choir’s go-to soloist for its roof-raising traditional fare, such as This Morning When I Rose, They Got the Word and I Love to Praise Him.

At age 72, Burks received an opportunity not afforded to many great-grandmothers: she recorded her first solo album. Mama Burks was released by Malaco in 2005 and featured appearances by the Mississippi Mass Choir and the legendary Dorothy Norwood. The year prior, Burks was featured in America’s Heart & Soul, a Disney film about everyday heroes. She has traveled the world with the Mississippi Mass Choir, sung for the Pope and can rightly assert as a truism the title of a song from her solo album: “God Has Brought Me from a Mighty Long Way.”