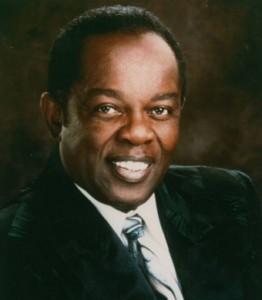 Although the world knows Lou Rawls as one of the smoothest soul singers of his generation, he started his career like so many popular artists do—singing for the church.

The three-time Grammy Award winner with the unmistakable baritone voice was born on December 1, 1933, in Chicago, Illinois.  Raised by his grandmother in the Ida B. Wells Homes on the city’s South Side, Rawls attended Greater Mount Olive Baptist Church where he sang in the choir.  As a teenager, Rawls joined the Teenage Kings of Harmony and then the Holy Wonders, a gospel quartet that, at one time or another, included soul great Otis Clay and gospel star Spencer Taylor Jr.

Like a star athlete, Rawls was a hot prospect for other quartets and it wasn’t long before he accepted an offer from the Los Angeles-based Chosen Gospel Singers.  It was with them that Rawls made his first recordings.  He is featured prominently on several songs from the group’s 1954 Specialty Records sessions, among them Ananais, I’m Goin’ Back with Him and the Christmas-themed No Room in the Hotel.  Most of the group’s Specialty sides, however, remained unissued until 1992.  After a stint in the Army, Rawls led the Chosen Gospel Singers’ 1957 Nashboro sides Walk with Me and Won’t Be Back before being recruited by the Pilgrim Travelers that same year.

Rawls’s tenure with the Pilgrim Travelers was captured on disc by Andex Records.  During this same time, the quartet tried its hand at rock and roll, putting out a few Andex sides as the Travelers.  Rawls’ soaring lead vocal on the love song “Why” gives an indication of his emerging power as a soul soloist.

In 1958, Rawls was involved in a serious car accident while traveling with the Pilgrim Travelers and Sam Cooke.  Although initially pronounced dead, Rawls was rushed to the hospital and resuscitated.  He remained in a coma for nearly a week.  It took him months to recuperate and regain his memory, but by 1959 he was back on the road singing.

He signed with Capitol Records in 1962, where he issued an album with the Pilgrim Travelers and a string of secular singles as a soloist, starting with 1966’s Love is a Hurtin’ Thing, which hit number one on the R&B chart, and Dead End Street and Show Business (both from 1967).  Also in 1962, he was a background vocalist on Sam Cooke’s hit single for RCA, Bring It on Home to Me.  Rawls’s 1969 hit Your Good Thing (Is About to End) earned a Gold Record.  In 1976, You’ll Never Find Another Love Like Mine sold a million copies and went to number one on the Billboard Easy Listening chart.  Another Rawls staple, Lady Love, followed in 1978.

By this point, Rawls’s recognizable baritone was seemingly everywhere.  He was acting in films and on television, did voiceover work for commercials and even sang a jingle for WGN-TV in his birthplace of Chicago.  In 1980, he turned his attention to philanthropy, inaugurating the long-running and successful “Lou Rawls Parade of Stars Telethon” to benefit the United Negro College Fund.

After decades of soul music stardom, Rawls began recording gospel again, this time as a soloist.  In 2001, he released I’m Blessed on Malaco Records.  The album features a handful of gospel chestnuts, including his friend Sam Cooke’s Jesus Be a Fence Around Me, and the Hawkins classic, Oh Happy Day, on which he is backed by the Georgia Mass Choir.  The Mississippi Mass Choir supports Rawls on other selections.  The Reverend Milton Biggham considers producing Rawls’s gospel songs a highpoint in his career.