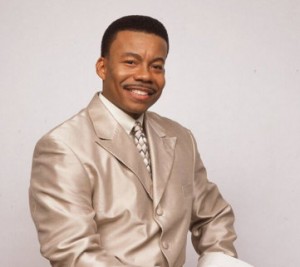 Most gospel enthusiasts know Lonnie Hunter as the host of a popular syndicated gospel radio show. His career in gospel, however, started as the director of a church choir.

Lonnie V. Hunter III was born in the Chicago suburb of Harvey, Illinois, on July 20, 1965. He is the youngest of Lonnie V. Jr. and Marie Hunter’s five children. Marie, a go-to background singer for Chicago-based gospel artists, passed away when Lonnie was eight. The young boy decided he would keep his mother’s legacy alive by participating in gospel music, himself.

Hunter pursued an undergraduate degree at Western Illinois University while serving in the air force, where he was promoted to sergeant. Upon his return to civilian life, he formed Hunter Communications Group, which taught corporate executives about leadership, cultural awareness and effective communication. The Gillette Corporation awarded his company its Pinnacle Award in 1999.

Despite his busy schedule—he even spent three years as a print model for Luster Products—Hunter kept his vow to maintain his mother’s legacy. He became the director of the Voices of St. Mark, a choir from St. Mark Missionary Baptist Church in Harvey. In 1994, he produced the choir’s first album, Hold Me (Arise Records). On the album, the choir sang songs written by Hunter, Percy Gray of the Chicago Mass Choir and emerging gospel producer Daniel Weatherspoon.

In June 1998, the self-titled Lonnie Hunter and the Voices of St. Mark was released on Muscle Shoals Sound Gospel, a subsidiary of Malaco Records. Like Hold Me, this album included songs written by Hunter (Shout Yes, with Charles Longstreet) and Weatherspoon (My Mind Is Made Up), as well as a selection by future praise and worship star VaShawn Mitchell (Renew Me). Five years later, the choir produced another album for Muscle Shoals, Next Level. This album, too, featured compositions by Mitchell and Hunter, as well as Daniel Weatherspoon and his brother, Michael. These albums spawned hits such as Even Me (the Drip Drop Song), Let’s Dance and There’s Power.

Hunter started his radio career in Chicago in 2003 as the host of the morning drive on the city’s top rated all-gospel station, WGCI-AM. In 2007, Radio One gave him his own nationally syndicated program, The Lonnie Hunter Show. He won a Stellar Award for Announcer of the Year in 2010.

Despite the demands of his afternoon radio show, Hunter continued pursuing a recording career. I’m Back (Blacksmoke Music Worldwide, 2011) featured his handpicked choir Structure and possessed a more traditional feel than his work with the Voices of St. Mark. Another release with Structure, #GETITDONE, came out in 2015 on Tyscot Records. That same year, the One Flesh Ministries Bible Institute in Glenwood, Illinois, awarded Hunter an honorary doctorate in sacred music.

In addition to his many entrepreneurial and media endeavors, Lonnie Hunter is also Pastor of Worship at Bethany Baptist Church, a megachurch in Lindenwold, New Jersey, where the Pastor is Bishop David G. Evans.