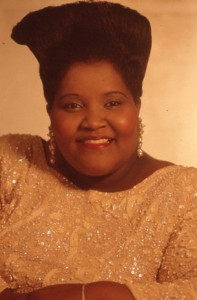 Born September 7, 1961, to Murphy and Bettie Ann Pace in Atlanta, Georgia, and brought up in the Church of God in Christ (COGIC), Tarrian LaShun (Shun) Pace began singing in church as well as with her eight sisters in the Stellar- and Grammy-nominated vocal group the Anointed Pace Sisters. The sister group, formed by Bettie Ann, won Best Gospel Group at a COGIC convention and toured nationally with their dynamic singing uncle Evangelist Gene Martin as part of Evangelist A.A. Allen’s Action Revival Team.

At some point, LaShun, who can growl with ferocity as easily as she can nimbly run up and down the musical stave in unbridled improvisation, ventured off as a gospel soloist. Her 1990 vocal performance on The House of the Lord, recorded for Dr. Jonathan Greer and the Cathedral of Faith Choir’s Savoy album He’s Worthy, inspired the label to sign her as a solo artist. Her debut solo album, He Lives, featuring the old school favorite I Know I’ve Been Changed, hit stores in 1991. Subsequently, Savoy signed the Anointed Pace Sisters and released U-Know in 1992. U-Know remained on the Billboard Top Gospel Albums chart for more than a year, rising to No. 2.

LaShun continued pursuing a solo career while singing with her sisters. Her solo albums for Savoy were Shekinah Glory (1993), Wealthy Place (1996), Just Because God Said It (1998) and God Is Faithful (2001). In addition, she made formidable guest vocalist appearances on other artists’ records, such as on the remarkable He’s a Shelter for Reverend James Moore and the Mississippi Mass Choir’s 1995 Malaco project, Live at Jackson State University, and Create in Me for the AARC Mass Choir.

In 1992, LaShun was seen on the big screen as the Angel of Mercy in the Steve Martin film Leap of Faith. She would later star in faith-based musicals such as David E. Talbert’s A Fool and His Money.

But LaShun’s life was not without its challenges. Divorced from her husband, Edward Rhodes, she raised her children on her own. In 2001, her eldest daughter Xenia, who had been the subject of bullying at school, died suddenly of a heart attack; the autopsy report showed she had an enlarged heart. Xenia’s death sent LaShun into a deep depression. She also fought cancer and weight issues and her esophagus ruptured, nearly causing her death.

Since then, LaShun has regained her health and has reentered the gospel music industry. The titles of her recent solo albums—It’s My Time (EMI Gospel, 2005), Complete (EMI Gospel, 2007) and Reborn (Shanachie, 2011)—seemed to announce her career and life reboot. She sounded physically and spiritually fit on 2017’s God Sent Me Tyrone.

LaShun Pace was inducted into the Christian Music Hall of Fame in 2007, and in January 2015, she and the Anointed Pace Sisters were honored in their hometown of Atlanta at the 16th Trailblazers of Gospel Music Awards.