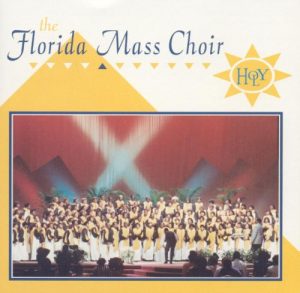 A series of events led to the founding of the Florida Mass Choir, the first of which was the establishment of the Florida Chapter of the Gospel Music Workshop of America, Inc. (GMWA) in 1972. Attending the GMWA Board Meeting in New Orleans, Fred Mendelsohn of Savoy Records heard a tape of a Florida Chapter member, the New Redemptive Ensemble of Tampa, under the direction of Revs. Milton Biggham and Arthur T. Jones. Mendelsohn was so taken by the tape that he decided to record the group for Savoy. The Time Is Now was released in 1974.

Subsequently, the Tampa Mass Choir was assembled from members of the Tampa Chapter of the GMWA as well as from the New Redemptive Ensemble, Voices of Faith Community Choir, Tarpon Springs Community Choir, St. Petersburg Concert Chorale and the University of South Florida Gospel Choir. Tampa hosted the eighth GMWA Board Meeting, and Savoy recorded the Tampa Mass Choir’s debut LP, I Give My Life to Thee, in 1976.

At this point, Biggham was tagged to be Savoy’s promotion director, and Jones set out to strengthen the Florida Chapter of the GMWA by training and rehearsing groups in several cities. He assembled the Florida Mass Choir by combining the Tampa Mass Choir and mass choirs from Fort Lauderdale, Orlando, Greater Miami, Jacksonville and Gainesville. Directors of the local choirs served as co-directors of the Florida Mass Choir. The new group performed at Constitution Hall in Washington, DC, to a standing ovation.

The choir’s first release was also Biggham’s first production credit for Savoy: 1979’s Come, Let’s Reason Together. It was the first in a series of live double albums the choir released on Savoy. Following Come, Let’s Reason Together, which charted on Billboard in 1980, were Jesus Will Never Say No (1980), Be Encouraged (1981), Lord You Keep on Proving Yourself to Me (1982) and Storm Clouds Rising (1985). The City of Fort Lauderdale decreed November 21, 1981, Florida Mass Choir Day.

Biggham, who was then named executive director of Savoy Records, continued to work with the Florida Mass Choir not only as a co-director but also as a lead vocalist and accompanist. The choir benefited from the expertise of other top-shelf gospel musicians and songwriters such as V. Michael McKay and A. Jeffrey LaValley.

In 1987, the choir began recording for Malaco, starting with “Live” in Miami, Florida, which included the single Thank God for the Blood. Let the Holy Ghost Lead You also appeared in 1987, Higher Hope followed in 1990 and Now I Can See in 1992. The Florida Mass Choir maintained a steady presence on Billboard’s Top Spiritual/Gospel Albums chart during the 1980s and 1990s. By the mid-1990s, the choir was recording for Intersound and continued releasing chart-making albums. Meanwhile, the Florida Chapter of GMWA was divided into several individual chapters at the 1991 convention in Salt Lake City, Utah. There were six original cities with chapter appointments: Miami, Fort Lauderdale, Tampa, Orlando, Daytona and Jacksonville. Additional chapters were added later.

Released in 1999, Malaco’s Treasure: Greatest Hits is a collection of the best of the Florida Mass Choir. It includes Thank God for the Blood, Storm Clouds Rising, Look Where the Lord Has Brought Me From and Have You Been Tried in the Fire.