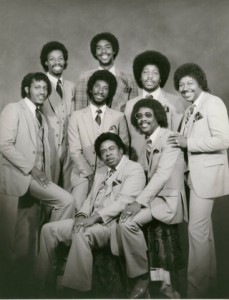 Now well into their seventh decade, the Violinaires were formed in 1952 in Detroit, Michigan, by Isaiah “Lil’ Shot” Jones, Wilson DeShields and Leo Coney. Arthur “Bob” Beatty, a pioneering quartet singer who served with the Heavenly Gospel Singers and the Sensational Nightingales, was another early member.

According to Beatty, the Violinaires initially sought to replicate the sound of the Heavenly Gospel Singers. Eventually, however, their emphasis on treble harmonies over a prominent bass vocal line set a new standard that gospel quartets still follow.

A young Wilson Pickett joined the Violinaires for a brief period in the mid-1950s before becoming a soul music superstar. Pickett’s shouting lead on the group’s pumping Sign of the Judgment (Gotham, 1957) presaged his trademark shout on Atlantic Records hits such as Mustang Sally and In the Midnight Hour.

In the early 1960s, the Violinaires introduced a new lead singer, Robert Blair, to the lineup. Blair’s high tenor and narrative style of singing propelled the group to prominence during a time when quartet singing was losing traction to piano-led gospel groups and mass choirs in terms of popularity. Among the group’s 1960s Checker Records standouts are Three Pictures of the Lord, Children Are You Ready, Old Time Religion, I Don’t Know, What He Done for Me and Stand By Me.

Stan Lewis signed the Violinaires to Jewel Records in 1971. With Blair as lead vocalist, the quartet spent the better part of the decade releasing singles and albums for the label. The propulsive Born Again and Woke up This Morning (With Jesus on My Mind) come from this period.

By the early 1980s, the quartet shifted to Malaco Records and released their first album for the label, The Fantastic Violinaires Featuring Robert Blair, in 1983. It produced gospel radio darlings Thank God for Mama and I’ve Come Too Far to Turn Around. Sing with the Angels, from 1986, featured So Much to Shout About. During the Malaco era, Violinaires members besides Blair included Danny Walker, David Battle, Tito Lewis, Cartrick Moore, Wesley Hill, Greg “Bobo” Harris and the return of Lil’ Shot.

After a handful of albums for Malaco, the Violinaires switched to Atlanta International Records. The group’s 1990 AIR album, God Has a Blessing for You, offered a fan favorite, Doctor Jesus.

The Violinaires have appeared at church concerts, jazz festivals, concert halls and civic centers, and have shared the stage with gospel and secular artists alike—from Pastor Shirley Caesar to the Manhattans. The quartet even inspired the Rolling Stones’ Mick Jagger and Keith Richards to write songs for them.

The group continues to minister today under the leadership of Titus “Lil’ Blair” Stallworth, who got his nickname from Blair himself, who said, “Titus sounded so much like me that it was scary.” Their 2013 live album for Malaco / 4 Winds, Reunited . . . Live in Richmond, VA, revisits classic Violinaires selections from the quartet’s robust repertory.