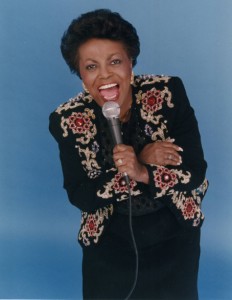 Dorothy Norwood is not only a church-wrecking singer who can shout a hymn until the notes beg for mercy, she is also known as Gospel’s Greatest Storyteller for turning songs into soul-stirring sermonettes with life-sustaining messages.

Born May 29, 1935, in Atlanta, Georgia, Norwood toured in the early 1940s with her family’s singing group, the Norwood Gospel Singers, then made her way to Chicago with hopes of becoming a nationally known gospel singer. She got her wish when Albertina Walker, manager of the Caravans, heard her sing the Staple Singers’ Low Is the Way during a 1956 Fellowship Baptist Church radio broadcast. Walker invited Norwood to join the Caravans. Norwood’s first lead on a Caravans record was 1956’s Standing in the Need of Prayer.

Not long after the recording session, Norwood’s mother fell ill and she returned to Atlanta to care for her. After her mother passed away, Norwood came back to Chicago, only to find that her spot in the Caravans had been filled by Shirley Caesar. Undaunted, Norwood linked up with James Cleveland’s vocal group, the Gospel Chimes, which showcased the talents of Imogene Greene, Jessy Dixon, Claude Timmons and Lee Charles Neely. She soloed on the Chimes’ 1962 Savoy single of the classic hymn It Is Well with My Soul.

In 1963, Norwood organized her own gospel group, the Dorothy Norwood Singers, and secured a recording contract with Savoy Records. Her first single, a sermonette called Johnny and Jesus, established her reputation as a storyteller. The LP of the same name, a live recording, earned a gold record. Other popular story songs Norwood recorded for Savoy in the 1960s included The Boy and His Kite, The Denied Mother and The Old Lady’s House. Some were recorded with the Dorothy Norwood Singers and others with a variety of large choirs.

Norwood’s fan base wasn’t limited to gospel music enthusiasts. Members of the Rolling Stones were so enamored by Norwood’s singing that they invited her and her group to join them on their 30-city tour in 1972. To the delight of the Stones’ Mick Jagger, but to the dismay of some rock critics, the group sang only gospel songs at the concerts.

With the exception of a seven-year period in the early 1970s, Norwood recorded exclusively for Savoy from 1963 to 1985, when she joined Atlanta International Records. She signed with Malaco in February 1991. Her first Malaco album, Live with the Northern California GMWA Mass Choir, hit No. 1 on Billboard’s Top Gospel Albums Chart in just seven weeks. Her second Malaco project, 1993’s Better Days Ahead, earned Stellar and Grammy nominations.

More Malaco releases followed, including Feel Like… (1994, with the Georgia Mass Choir), Shake the Devil Off (1995) and Hattie B’s Daughter (1996). But perhaps the most momentous of all her Malaco projects was Paved the Way, the 2005 reunion of the Caravans. Norwood joined fellow veteran Caravans Albertina Walker, Inez Andrews and Dolores Washington on an album that reprised some of the group’s classic songs and, in the process, garnered well-deserved Grammy and Soul Train nominations.

Norwood celebrated her golden anniversary as a professional gospel singer with 2009’s Fifty Years—It’s Been Worth It All. It featured a new version of The Denied Mother and Victory Is Mine, the latter with backing from Ricky Dillard and New G. She had released the congregational song the previous year to honor the election of Barack Obama as the first African American president of the United States. The song also appears on the soundtrack of the 2011 motion picture The Help. But it wasn’t the first time a Norwood song appeared in a film: her cover of the Commodores’ 1977 hit, Brick House, was featured in the 1996 film My Fellow Americans.

In 2012, Norwood released God’s Been Just That Good, which produced the single, We’ve Come a Long Way. Both were apropos titles, as that same year she started her own record label, Dorothy Norwood Music Group, and received the Ambassador Dr. Bobby Jones Legends Award at the 27th Annual Stellar Awards. Her 2014 aptly named Malaco release, An Incredible Journey, included When the Church Begins to Pray, a duet with veteran quartet singer Melvin Williams.

Dorothy Norwood’s comment on Paved the Way about her days with the Caravans could also serve as a summary of her own career: “We traveled through the South, through segregation, through Jim Crow, through Ku Klux Klan country, pavin’ the way . . . we slept in the colored hotels and rooming houses . . . but look at us today! We can go in the five-star Marriotts and Hiltons!”