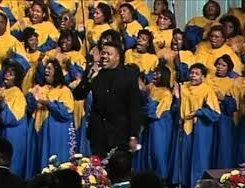 Riding a wave of enthusiasm from radio programmers and record buyers for the robust mass choir sound, Savoy Records executive producer Reverend Milton Biggham teamed up with the Reverend Armond W. Brown, pastor of the Fellowship Baptist Church of Oak Cliff, Texas, to organize the Dallas Fort Worth (DFW) Mass Choir. On March 20, 1990, more than 200 members representing some 100 churches throughout the Dallas-Fort Worth, Texas, metropolitan area gathered for the first rehearsal.

I Will Let Nothing Separate Me, the choir’s 1991 Savoy debut, was recorded at Calvary Temple Church in Irving, Texas. The album hit No. 5 on Billboard’s Top Gospel LPs chart, but more importantly, it introduced an emerging gospel singer, songwriter and pianist by the name of Kirk Franklin. Impressed by the young talent from Fort Worth, Biggham recruited Franklin to lead the DFW Mass Choir on a recording of Franklin’s Everyday With Jesus. It was included on the debut album.

Savoy followed with Another Chance in 1993, also recorded live at Calvary Temple. In addition to Franklin, who wrote the title track and Your Name Is the Same, the album included contributions from Donald Vails, Dottie Peoples and Myron Butler. That same year, the choir, with Franklin as a director, supported gospel star Myrna Summers on her Deliverance album, also for Savoy. But by the end of 1993, Franklin was on his way to superstardom. His debut album, Kirk Franklin & the Family, which introduced another future gospel star from Fort Worth named Tamela Mann, topped the charts and had a profound impact on the direction of gospel music.

DFW Mass Choir’s For His Glory arrived in 1994. Recorded at the Word of Faith Family Church in Dallas, the album included Anointed Pace Sisters standout LaShun Pace and firebrand vocalist Kathy Taylor. Like the choir’s two preceding albums, For His Glory made the Billboard Top Gospel Albums chart. In 1995, Interscope/CGI signed the DFW Mass Choir and released Lead Me, with the hit, He Is My Up (When I’m Down). I’d Rather Have Jesus (1998), also for Interscope, was another Billboard charter.

By the new millennium, Franklin and the many artists who followed in his wake had supplanted the mass choir with the male-led gospel group / small choir in terms of radio play and music sales. Nevertheless, as the title of its 2003 release for Light Records declared, the DFW Mass Choir was Pressin’ On. In 2008, Light presented a greatest hits set called Ultimate Dallas Fort Worth Mass Choir. It featured fan favorites such as Blessed Assurance, He’ll Bring You Out and I’d Rather Have Jesus.