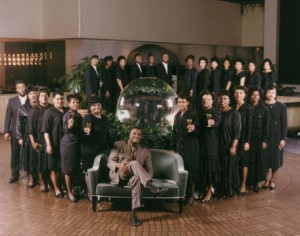 Born in Detroit on June 25, 1962, gospel songwriter, group leader, musician and singer Carnell Murrell spent his early life plagued by one difficulty after another. He contracted polio as a child and then spent his teen years in a gang and struggling with drug addiction. His parents’ divorce didn’t help matters.
Things changed for Murrell after he attended a revival at Pastor Edward Calloway’s Lighthouse Church of God in Christ in Dallas, Texas. He dedicated his life to Christ and soon began working with the Dallas Fort Worth Mass Choir. On the choir’s 1991 Savoy album, I Will Let Nothing Separate Me, which featured another up-and-coming songwriter, Kirk Franklin, Murrell contributed two songs: Joy Unspeakable and You Can Be Changed. He cites this experience as launching his gospel music career.
In 1992, his Carnell Murrell Singers appeared in the Steve Martin comedy film Leap of Faith alongside gospel legend Edwin Hawkins. The following year, Murrell played organ on Deliverance, the Myrna Summers and Dallas Fort Worth Mass Choir album for Savoy. He also soloed with Summers on He Chose Me and I Love You Lord.
Outside his work with Myrna Summers and the Dallas Fort Worth Mass Choir, Murrell appeared as a singer, songwriter and musician on several projects by Savoy and Malaco recording artists. Among them were the Bright Star Male Chorus, the Georgia Mass Choir, the Mississippi Mass Choir, Ricky Dillard, Reverend James Moore and Bishop Jeff Banks and the Revival Temple Community Choir. Murrell recorded three Savoy albums of his own, the first two with the NeWork Community Choir. You Can Make It If You Try appeared in 1992, hitting No. 27 on the Billboard Top Gospel Albums chart. Wait I Say on the Lord followed in 1993. The Prodigal Son by Carnell Murrell & Company appeared in 1997.
Murrell was named the first songwriting contributor to gospel power couple Claude and Vicki Mack-Lataillade’s Lilly Mack Writers & Sing-a-Long Series. The interactive, multimedia series of CDs and DVDs was launched in October 2008 to provide music ministers with easy songs for choirs and congregants to sing. Murrell debuted four of his songs, including You Are God and Is There Anything, on the series’ initial releases.
Nominated for Soul Train and Stellar Awards, Murrell has also written songs for projects by Dorinda Clark-Cole and Byron Cage, and penned Dave Hollister’s hit single What Do You Do.
After releasing a solo album titled Because of You in February 2011, Murrell turned from the studio to assist with citywide choir workshops. Nevertheless, he can be heard playing keyboards on Israel Houghton’s 2013 film I’m in Love with a Church Girl. As of 2015, the indefatigable Carnell Murrell was back in the studio working on new music.