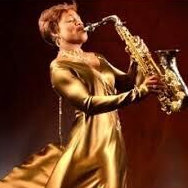 Born to missionary parents in Los Angeles on February 19, 1963, Christie grew up on the road, attending one Pentecostal church after another. Her dream was to become a rock guitarist, but her parents only allowed sacred music to be played in the house. So at age 14, with pawn shop–purchased saxophone in hand, Christie was nudged before a church crowd to play a hymn. The congregation’s response was so enthusiastic that her rock star dreams evaporated. From there, she was intent on interpreting church hymns and gospel songs on the saxophone.

Christie formed Angélla Christie Sound Ministries in Atlanta upon graduating from Houston Baptist University in 1985. That same year, she recorded a four-track EP called Because He Lives. It was the first of a few independently released albums of hymns and sacred songs that Christie set to smooth jazz, with the saxophone as lead instrument.

Like a Hammond B3 in the hands of a gifted church organist, the saxophone in Christie’s hands is a fully formed gospel singer, capable of expressing a multitude of human emotions. And if the novelty of being a female Christian saxophone player isn’t enough, her stage device of playing shoeless further distinguishes her among her peers.

Christie’s sax appeal went national in 1996 when she signed with Atlanta International Records (AIR) and released Eternity. A funky take on Farther Along and a simmering sax solo on Amazing Grace helped sell a reported 30,000 copies. The album, which was also released as a video, helped Christie secure appearances on major platforms, such as the Church of God in Christ Convocation, the Gospel Music Workshop of America, the Bishop T.D. Jakes Woman Thou Art Loosed Conference ’97 and the National Baptist Convention USA, where she performed before President Bill Clinton.

Hymn & I (AIR, 1999) made the Billboard charts with its combination of evergreen gospel songs such as Great Is Thy Faithfulness and popular contemporary compositions, such as Richard Smallwood’s Center of My Joy. That same year, Christie received the Instrumental Gospel of the Year award from the National Black Programmers Coalition and the Award of Excellence—Instrumental from the Gospel Music Workshop of America. She has appeared on television, most notably on The 700 Club and BET’s Jazz Scene, and earned a Stellar Award nomination.

Christie’s latest album, 2017’s Intimate Conversations (ACSM), finds the instrumentalist interpreting some of today’s most popular praise and worship hits, such as Break Every Chain, How Great Is Our God and I Give Myself Away.