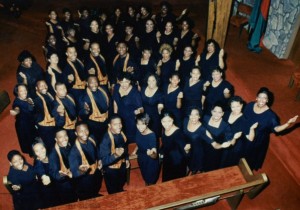 The Sanctuary Choir of Jackson, Mississippi’s Anderson United Methodist Church impacted the gospel music industry in 2004 when it recorded the album Joyful Praise—90 years after the church’s founding as a mission.

According to Rudolph Stanfield Jr., who produced the live recording session, the church did not have a record deal when the album was cut. But Jerry Mannery, former executive director of Malaco’s gospel division and president of the Mississippi Mass Choir, happened to be a member of the church. Malaco President Tommy Couch Sr. was present for the recording and told Mannery he wanted the album for Malaco. Despite at least one other label suitor, Joyful Praise was released on Malaco in late 2004.

Of the album’s 11 selections, the Stanfield-penned Lord I Thank You was chosen to be the lead single. According to Stanfield, he initially presented the rollicking song to the Salem Baptist Church of Omaha, Nebraska, for a Blackberry Records project with which he was involved. But the Salem version didn’t come out to Stanfield’s satisfaction. On the other hand, the Anderson Sanctuary Choir version did, and its success surpassed the expectations of its songwriter. The single charted on Billboard, peaking at No. 14 in July 2005. “You could not have seen it coming,” Stanfield said.