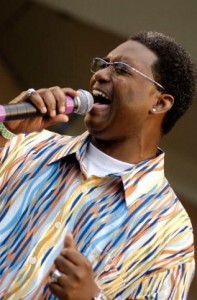 Allen picked up the keyboard when he was very young and was performing in church by the age of five. He began recording and producing his own material while still in high school, and soon after graduation he joined the legendary gospel band the Canton Spirituals in 1990.

He toured with the gospel group for 12 years until turning his sights on his solo career. During this time Allen honed his vocal skills as well as his production skills. By 2000 he found himself working as a producer with Willie Clayton, Bobby Rush, Peggy Scott-Adams and others, as well as contributing his keyboard skills to several recordings.

Allen released his first solo album, Let’s Dance, in 2002 and was soon brought to the attention of Malaco Records by Texas soul singer Mel Waiters. Allen signed with the label and in 2004 released Old School . . . New Flava on Waldoxy Records, which prompted Living Blues magazine writer David Whiteis to state, “ . . . Vick Allen has come through with a set that’s emotionally satisfying, musically sophisticated and—above all—both hip and adult.” He followed in 2005 with Simply Soul and in 2007 with the EP Baby Come Back Home.