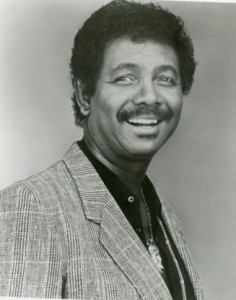 Singer Tyrone Davis possessed one of the great voices of the classic soul era. Davis presented himself as a wounded romantic whose vulnerability and lack of overt machismo made his a fan favorite among women.

Born in Greenville, Mississippi, on October 3, 1937, Davis eventually settled in Chicago in the late 1950s. In 1961 he landed a job as Freddie King’s valet and was struck by the desire to be an entertainer himself. He began sitting in with groups at various clubs around the city and was soon being mentored by vocalist Harold Burrage. Burrage helped arrange Davis’ first recording session at Willie Barney’s Four Brothers label, where he was billed as “Tyrone [The Wonder Boy].”

In 1968 Davis was singing at a club when Brunswick Records’ Otis Leaville heard him. Leaville suggested he come to their offices and meet influential producer Carl Davis. Davis had produced Jackie Wilson, Gene Chandler, the Chi-Lites and many other hit groups for Brunswick and was always looking for new talent. But Carl was not impressed with Tyrone and told him so. Fortuitously, house songwriter Floyd Smith heard something in him that piqued his interest. Smith secretly recorded Davis singing his song A Woman Needs to Be Loved. Carl Davis was furious and said the song was promised to Jackie Wilson—end of discussion. But Smith was also Carl’s limo driver, and that evening when he drove his boss home he sneaked the tape into his house and put it on while Carl was upstairs. Suddenly the producer burst into the room asking who was singing the song. Carl called Tyrone the next morning and asked him to come to his office. He agreed to record Tyrone but insisted that he couldn’t put it out on Brunswick for eight to nine months. However, he did have a small label of his own, Dakar Records, through which he could release the recording. Tyrone acquiesced and the single was released but didn’t catch fire. By chance, Houston DJ Wild Child began playing the B-side Can I Change My Mind and to everyone’s surprise is was a smash hit that reached No. 1 on Billboard’s R&B chart in late 1968. Davis and Davis followed with 23 chart hits over the next decade including the No. 5 follow-up Is It Something You’ve Got in 1969, Turn Back the Hands of Time (No. 1 in 1970), I Had It All the Time, Without You in My Life and his last No. 1 hit, Turning Point, in 1975.

In 1976 Tyrone Davis left Dakar and moved to Columbia Records where over the next three years he continued his string of chart successes including the two No. 6 entries This I Swear (1977) and In the Mood (1979). By 1982 Davis and longtime producer/songwriter Leo Graham had split with Columbia and the pair released albums on the Highrise, Ocean Front and Future labels including the 1982 No. 3 hit Are You Serious. In 1991 Davis moved to Atlanta-based Ichiban Records and scored again with the jukebox favorite Mom’s Apple Pie.

Davis signed with Malaco Records in 1996 and released Simply, the first of five studio albums with the label. With longtime partner, songwriter, arranger and keyboardist Leo Graham at his side, Davis’ disc garnered critical acclaim for being “real.” Living Blues critic Steven Sharp stated, “His strongest effort in years, Simply should once again prepare T.D. to chase his old rival Johnnie Taylor up the R&B charts.” Davis and Graham followed in 1997 with Pleasing You and in 1999 Davis, this time with producer Paul Richmond, presented Call Tyrone which included Call Tyrone and Turn Back the Clock and the George Jackson–­­penned hit Cheatin’ In the Next Room. The year 2000 found Davis again paired with producer Paul Richmond for Relaxin’ With Tyrone, which features the hit What’s a Man to Do and the touching homage to his longtime friend, Tribute to Johnnie Taylor. Back to the Future Years, a collection of Davis tunes recorded between 1988 and 1991 was released in 2001 and was followed in 2002 with his final recording for Malaco, Love Line.

Throughout his career Davis remained a hugely popular live act and was credited as having one of the finest show bands in the blues.

Tyrone Davis died in Chicago on February 9, 2005, of complications arising from pneumonia. As was noted in his Living Blues obituary, “Aside from his purely musical gifts, Davis was deeply respected for his professionalism and dedication to his craft. He worked hard to create a sound that would be identified as distinctively his own, and constantly surrounded himself with the finest writers, arrangers and musicians available.”