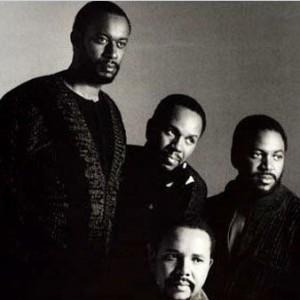 The Controllers were founded in Fairfield, Alabama, in 1965. Originally known as the Epics, the vocal group initially performed gospel music. As high schoolers they met with Ramsey Lewis Trio bassist Cleveland Eaton, who wrote their first single, Right On, Brother—Right On, which they recorded and released as the Soul Controllers. The song became a regional hit, and following high school the four core members—brothers Larry and Reginald McArthur, LeNard Brown and Ricky Lewis—shortened their name to the Controllers.

In 1976 Frederick Knight signed the Controllers to his Juana label, and they recorded their debut album, In Control, at Malaco Studios in Jackson. Released in 1977, the record scored a hit with the eight-minute ballad Somebody’s Gotta Win, Somebody’s Gotta Lose, which rose to No. 8 on Billboard’s R&B chart and No. 3 on Cash Box’s soul chart. Another ballad, Heaven Is Only One Step Away, charted on Billboard R&B at No. 37. Knight produced two more albums for the Controllers on Juana, Fill Your Life With Love in 1978 and Next in Line in 1979.

The Controllers went on to enjoy further success with recordings on various labels and appeared on programs such as Soul Train. After a hiatus from the studio and the road, they signed with Malaco Records in 1997. Clear View was released later that year, and on songs such as When I’m Away and a new version of Somebody’s Gotta Win, Somebody’s Gotta Lose, they revamped their yearning, lush ballad style with modern production values. The album also featured a spirited, hip-hop imbued cover of Stevie Wonder’s Superstition.