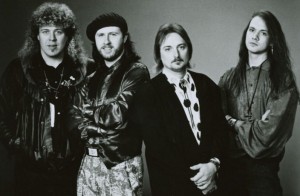 Vocalist and harmonica player Larry Grisham and guitarist Tommy Stillwell founded The Beat Daddys in 1986. The musicians met as teenagers in Cloverport, Kentucky, in 1970 and began playing together around town, eventually forming a power pop group called the Phonz in the early 1980s. After touring regionally and releasing an EP, their shared interest in the British Invasion led them back to the blues. As the Beat Daddys, they opened for artists such as B.B. King and Little Milton and issued a self-titled album in 1990.

Following an Asian tour, the Beat Daddys visited a Jackson, Mississippi, barbecue restaurant and blues venue, where they left behind a copy of their album. While simply hoping to land a gig, the blues-rock band ultimately received a recording contract—the restaurant owners were Malaco Records executives, and they signed the Beat Daddys to their Waldoxy imprint in 1992.

No, We Ain’t From Clarksdale followed later that year. Recorded in Muscle Shoals, the album features saxophonist Jim Horn, percussionist Paul “Heavy” Lee and horn arrangements by Harrison Calloway. Grisham and Stillwell composed most of the songs, including the yearning I’ll Always Love You, while George Jackson wrote the rousing Tear the House Down and collaborated with Grisham and Stillwell on Bad News.

The Beat Daddys returned to Muscle Shoals to cut their next Waldoxy record, South to Mississippi, in 1994. The Swampers backed them in the studio, including famed guitarist Jimmy Johnson, drummer Roger Hawkins, and bassist David Hood; Dorothy Moore sang backing vocals. The beautiful ballad The Love of a Woman is one of several Grisham/Stillwell originals on this album.

In 1995 Stillwell departed the band, and the revamped lineup on the 2001 release Delta Vision featured guitarist Britt Meacham and keyboardist Johnny Neel. Grisham and Stillwell have since reunited as the Beat Daddys and continue to record and perform. Their contributions can also be found on the Malaco compilations Z. Zelebration: A Tribute to the Late Great Z.Z. Hill, Southern Shades of Blue, Volume One and Volume Two and The Last Soul Company: Malaco, a Thirty-Year Retrospective.