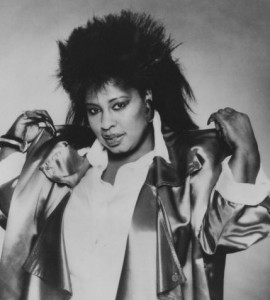 Shirley Brown has often been compared to Aretha Franklin, but her richly authoritative voice, tempered with delicacy and sweetness, is all her own. Born on January 6, 1947, in West Memphis, Arkansas, Brown relocated to St. Louis, Missouri, with her family in 1956.

Later, they moved to nearby Madison, Illinois, and from a young age Brown attracted notice in the area for her powerful, emotive gospel solos. At 14 she was singing at the Harlem Club in Brooklyn, Illinois, where she caught the attention of Albert King. The famed blues guitarist became her manager, and for nine years she performed with his band as well as with other artists, such as Johnnie Taylor and Little Milton. Brown also worked with bandleader Oliver Sain, who produced and arranged Brown’s first single, I Ain’t Gonna Tell / Love Is Built On a Strong Foundation, for the Abet label in 1972.

These early recordings garnered airplay on Memphis radio stations, and with King’s assistance Brown signed with Stax Records in 1974. Her initial single for the company, Woman to Woman, was a hit. Written by James Banks, Eddie Marion and Henderson Thigpen, the song spent two weeks at the top of the Billboard Hot Soul Singles chart, reached No. 22 on the Hot 100 and sold over a million copies. Her full-length debut, also titled Woman to Woman, was likewise successful, charting at No. 11 on R&B Albums and No. 98 on the Billboard 200. Woman to Woman would also prove to be Stax’s last hit single, and the company folded in 1975.

After releasing three albums on various labels, Brown signed with Malaco Records in 1989. Produced by Brown, Jim Stewart and Winston Stewart, Fire & Ice appeared later that year and reached No. 66 on Billboard’s R&B Albums chart. Brown’s passionate duet with Bobby Womack on Brenda Lee Eager and Billy Osborne’s Ain’t Nothin’ Like the Lovin’ We Got also charted, rising to No. 46 on Hot R&B Singles. Other standout tracks include the yearning Take Me to Your Heart, co-written by Brown with Winston Stewart, the rousing Homer Banks / Lester Snell ballad Sowed to the Wind and George Jackson’s stirring I Wonder Where the Love Has Gone.

Brown’s next release for Malaco was Joy & Pain in 1993. Frederick Knight joined Brown, Winston Stewart and Bobby Manuel as an album producer, with Jim Stewart again serving as executive producer. Brown and Knight co-wrote the spirited title track, and Knight also penned Hearts Are Made to Be Loved and It’s a Pleasure Easin’ Your Pain. Brown composed A Two-Way Thang, an answer song to Three Way Love Affair, with Earl Randle and John Ward, and the poignant It Don’t Hurt Like It Used To with Winston Stewart. The backing musicians include the Muscle Shoals Rhythm Section and guitarist Will McFarlane, and Harrison Calloway contributed horn arrangements.

Brown’s 1995 record Diva of Soul brought her back to the charts, reaching No. 67 on Billboard’s R&B Albums. Brown and Manuel co-produced the release and shared writing credits on Good Loving Man and You Ain’t Woman Enough to Take My Man. The latter also proved popular and rose to No. 80 on the Hot R&B Singles chart. Full of fine ballads, including Brown’s own Sprung on His Love, Living Blues critic Peter R. Aschoff asserted that Brown’s admirers would “find Diva of Soul to be one of the finest Southern soul/blues outings in recent memory.”

Released in 1997, The Soul of a Woman features production from Brown, Manuel, Richard Cason, Tommy Couch and Wolf Stephenson. The Muscle Shoals Rhythm Section again provided support, as did Will McFarlane and Lester Snell. Why You Want to Love Me Like That, by Brown and Manuel, is masterful and funky, and their Female Player incorporates hip-hop elements into its slinky groove. Brown also wrote Don’t Go Lookin’ for My Man with Snell and Homer Banks and You Left a Good Woman for a Good Time with George Jackson. Cason penned four of the album’s tracks, including the anguished Who Is Betty. Brown delivered Dottie Rambo’s He Looked Beyond My Faults with heartfelt fervor, and the Mississippi Mass Choir supplied the gospel song with soaring harmonies.

Joined by several of the same studio personnel as her previous album, Brown’s 2000 release Holding My Own found her doing just that. Her own sassy Sweet Lips, Big Hips and Denise LaSalle’s regal The Best Woman are album highlights. Cason’s How Close We Came is heartbreakingly beautiful, and the Mississippi Mass Choir buoyed Brown a second time on Frederick Knight’s uplifting Through the Storm.

Woman Enough arrived in 2004, and Brown, Cason, Couch, Snell and Stephenson produced the release. Keyboardist Vick Allen was among the backing players, which included Brown session veterans such as David Hood and Clayton Ivey. The earthy Poon Tang Man, composed by Brown and Snell, was a hit on southern soul radio, as were Frederick Knight’s I’ve Got to Sleep with One Eye Open and Too Much Candy.

Brown’s most recent album for Malaco was Unleashed in 2009. Allen contributed production to the release alongside Brown, Cason, Knight and Stephenson. The blistering (You Promised Me Heaven, But) You Gave Me Hell by Larry Chambers, Raymond Moore and John Ward, is the apex of the set. “Brown is in typically awesome voice throughout,” declared Living Blues critic Lee Hildebrand, “her radiant mezzo pipes soaring with melismatic majesty.”

Other available Brown recordings include the 1998 release Three Way Love Affair, a collection of songs from her first four Malaco albums on the 601 Records subsidiary, and Divas in the Delta—Live in Greenwood, Mississippi, a 2005 concert film featuring Brown and Denise LaSalle.