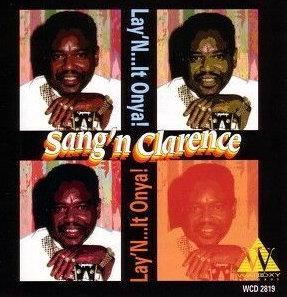 Vocalist Sang’n Clarence was born Clarence Ray Brown in Fort Worth, Texas. He grew up singing in church, learning how to harmonize by participating in quartets and gospel groups. A popular local solo artist, he was mentored by Johnnie Taylor and performed with him as an opening act.

Clarence’s debut album, Lay’N . . . It Onya!, was released on Waldoxy Records in 1997. His smooth tenor is shown to advantage on a variety of material, from the funky, salacious Ole Dirty Rat to the yearning Don’t Walk Away. Butch Bonner and Brown produced the album and co-wrote most of the songs, with the exception of the Sam Mosley and Bob Johnson ballad Runnin’ In and Outta My Life. Bonner also served as a multi-instrumentalist, and Brown contributed vocals to each track.

Clarence has since released several more recordings, and also spent time as a member of Mel Waiters’ Hit It & Quit It Band.