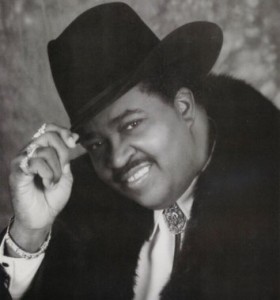 Hubert Joe “Poonanny” Burns was a one of a kind character. A flashback to the classic trickster hero storyteller, dozens master Poonanny was a larger than life entertainer—in fact he was a “funk-folklorist.”

Born on January 6, 1940, in Birmingham, Alabama, Burns was tagged with his nickname early in life for frequent flatulence. He naturally fought the moniker early on but eventually learned to accept it and ultimately embraced it.

The movie The Gene Krupa Story inspired the youngster to start drumming, and as a teenager he joined forces with a neighborhood friend who played harmonica and performed at local parties. By the mid-1960s he had formed his own band, and the group Poonanny and the Stormers soon became the house band at the Hi Fi Club in Huntsville, Alabama. Over the next decade his band evolved into the 15-member Poonanny Revue and played clubs all over the Deep South.

By the mid-1970s disco had taken a toll on traveling shows so Poonanny decided to go into the club business. After opening his first club in Monroe, Louisiana, he continued with several places called the Nanny, including one on Columbus, Mississippi, and eventually back home in Birmingham. The clubs were popular and featured major acts including Z.Z. Hill, Denise LaSalle, McKinley Mitchell and even Charles Brown performing on Christmas day.

Joe Poonanny has always been a popular act with both African American and white audiences. His humor, as well as his ability to sing both blues and country, has served him well. In 1993, while working at the country nightclub Gilley’s in Grenada, Mississippi, he ran into Tommy Couch Jr. from Malaco Records and the two hit it off. Couch soon began booking him through his CAI Entertainment company. Poonanny had been a successful entertainer for more than 30 years but had never made a recording. This all changed when he sent Couch some demo tapes and Couch signed him to the Malaco subsidiary Waldoxy Records. As he said, “How could I possibly die and not leave this world something with the name Poonanny on it?” Poonanny Be Still was released in 1993 and was an immediate hit in the southern soul market. With songs from Bobby Rush, Denise LaSalle, Clarence Carter, Latimore and Poonanny himself there was plenty to work with.

Waldoxy came back in 1994 with The Grindin’ Man continuing the string of risqué, double entendre songs that listeners simply ate up. “People love knowin’ somebody else’s business, that’s why all those talk radio shows are so popular. I’m just talkin’ shit and that’s what people want to hear.” His success on the chitlin’ circuit grew as the string of releases continued with Ponyrider (1996), Brand New Cadillac (1998) and finally That Baby Ain’t Black Enough! (2001), all following the same successful formula with humorous cover art, adult themed songs that utilized the best songwriters in the Malaco stable plus Poonanny originals, all delivered in his own unique, hilarious way. Living Blues described his string of releases as “ . . . sufficiently raunchy to please his diehard fans, but tasteful and soulful enough to win favor among a more general audience.”

“The Godfather of the Chitlin’ Circuit” Joe Poonanny died on August 27, 2014, in Birmingham, Alabama, and was eulogized by members of his group of friends from the Grease Monkey Social Club where he once held court.