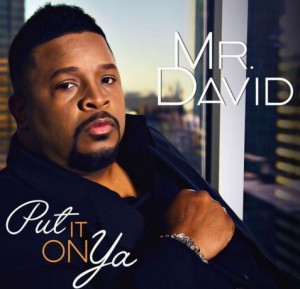 R&B fans may remember David Jones from the hit single Splackavellie, a hip-hop flavored playa’s anthem he released under the name Pressha in 1998. A few years after that, he adopted a new stage name, Mr. David, along with a newly minted southern soul persona—no less sexy, no less contemporary in his storylines and imagery, but without the cynical edge. His 2004 CD, Jody Is Back, on TMR/SOH, included a pair of dance floor anthems—Shoo da Wop (two versions, one featuring Sir Charles Jones) and Slide On—that became instant club favorites. His 2005 follow-up, Southern Soul Singer, was picked up for distribution by Waldoxy; by 2008, he’d signed to the label and released Me Loving You.

By this time, David had honed his fully mature style—tough-timbred vocals backed by streetsy sounding beats and studio production, leavened by an underlying tenderness. That spirit was most apparent on the title track, a call-out to misguided “young boys” who mistake machismo for manhood (“I don’t know just how you were brought up,” he sings, “But my  daddy taught me never put my hands on a woman—lift her up”). With its evocative references to Marvin Gaye’s Let’s Get It On, the song sends a message that too often seems in short supply in much mainstream culture, especially music—marking Mr. David as a true Soul Man of the highest order.