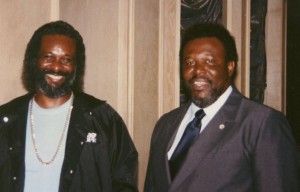 The duo of Sam Mosley and Bob Johnson are from the small Mississippi Hill Country town of New Albany. Born on March 30 and March 4, 1946, the pair knew each other virtually all of their lives.

Guitarist Sam Mosley began his musical career in 1959 in a band with his brothers called Jamie & the Dynamics. After a stint in Vietnam Mosley returned home and hooked up with keyboard player Bob Johnson who was fronting a band called Bobby Johnson & the Messengers.

The new aggregation called Sam and Bob & the Soulmen released their first album, Mississippi Mud, on their own Sabo label in 1971. They later recorded for Polydor as Mojoba but found their niche writing, arranging and producing as members of the Muscle Shoals studio band in Alabama.

In 1987 the duo, now simply known as Mosley & Johnson, teamed up with Malaco Records to release Mosley & Johnson on their Muscle Shoals Sound Records subsidiary. The pair followed in 1989 with Premium. During their years with Malaco they were part of the powerful group of songwriters utilized by the label. Mosley & Johnson songs were recorded by Johnnie Taylor, Bobby Bland, Little Milton and others.

Mosley & Johnson’s third album for Malaco, Juke Joint, was named by Living Blues magazine as one of the top 30 blues albums of the 2000s. Bob Johnson died on August 22, 1998, from a heart attack onstage during a performance. Sam Mosley continues to write songs and perform with Johnson’s brothers as the Mosley Johnson Band.