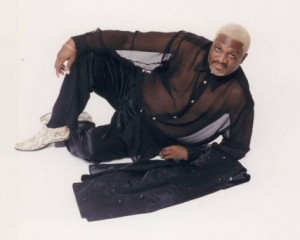 The music of vocalist, instrumentalist and songwriter Mel Waiters blends elements of blues, R&B and soul into a potent mixture that, along with his favorite themes of good times and romance, won him acclaim on the southern soul circuit and beyond. In summarizing Waiters’ appeal, Living Blues critic David Whiteis wrote in 2006 that “his insinuating voice, his personal aura of good-hearted masculine gentleness, and the roomy, natural-sounding production he favors (live horns, delicately interwoven guitar lines) are all vital assets in a genre that too often succumbs to cheap thrills, double-entendre silliness, and in-studio mediocrity.”

A native of San Antonio, Texas, Waiters was born on June 25, 1956, and was raised by his grandparents, Vivian and Samuel Waiters. As a youngster he sang in the Jacobs Chapel United Methodist Church choir, and learned to play the drums after receiving a set as a Christmas gift. In junior high Waiters became the drummer for the Gotson Brothers Band, and together with guitarist Albert Gotson, bassist Michael Gotson and a horn section, they performed at teen clubs on military bases and at school and community functions in the area.

After graduating high school in 1974, Waiters worked at Alamo Iron Works before attending the Elkins Institute, where he earned his broadcaster’s license. For over a decade he was a popular radio disc jockey, serving stints at San Antonio’s KEDA, KAPE, KITY and at KALO in Beaumont, Texas. He also deejayed at local nightspots, such as Zapp and the Web Lounge, and fronted his own group, the Mel Production Band. With the Gotson Brothers he cut his first single, Do the Airplane, in the late 1970s and later self-recorded and released an LP, 1980 for the Ladies.

Waiters began singing live with a keyboard sequencer while working as a deejay at the nightclub Primetime, and this led to a seven-year residency performing with his Concept Band at Fort Sam Houston’s NCO Club. In the mid-1990s he wrote Hit It and Quit It for blues artist Buddy Ace, but Ace died before recording it. Waiters released his own version of the song on I’m Serious for Serious Sounds in 1995, and he credited New Orleans R&B legend Bobby Marchan for aiding in its subsequent success. A second recording for Serious, Suki-Suki Man, followed in 1997.

Hit It and Quit It won a Jackson Music Award in 1996, and at the ceremony in Jackson, Mississippi, Waiters met Malaco Records executive Tommy Couch Jr. Woman In Need was already completed, and after presenting Couch with a copy, Waiters signed with Malaco’s subsidiary Waldoxy, which released the album in 1997. The passionate title track was the first single, but the second, Got My Whiskey—a smooth, infectious dance number—was a hit, and the album ultimately reached No. 11 on Billboard’s Blues chart.

Waiters’ next recording for Waldoxy would bring him even wider notice. Released in 1999, Material Things featured the irresistible party anthem Hole In the Wall, which not only proved to be a smash hit but Waiters’ biggest selling single as well. Remixed by hip-hop/funk artist Bigg Robb, it reached No. 24 on Billboard’s Hot Dance Music/Maxi-Singles chart. Material Things also placed on the Blues chart at No. 5 and on the Top R&B/Hip-Hop Albums chart at No. 83. Waiters wrote most of the songs and played keyboards and drums, backed by guitarist Will McFarlane and saxophonist Harvey Thompson. The album also included soulful versions of George Jackson’s I’m So Glad and Chuck Brooks’ Trying to Walk Away.

Let Me Show You How to Love followed in 2001, reaching No. 8 on Billboard’s Blues chart. Waiters once again collaborated with Bigg Robb, this time on a funky, urban cover of Johnny “Guitar” Watson’s A Real Mother for Ya. His own urgent ballad Show You How to Love Again and the romantic George Jackson song How Can I Get Next to You are album highlights.

Waiters continued his successful run at Waldoxy with A Nite Out in 2003, which topped the Blues chart at No. 15 and broke the Top R&B/Hip-Hop chart at No. 98. Joined in the studio by multi-instrumentalist Butch Bonner, Waiters mixed trademark fare such as Girls Nite Out, Smaller the Club and Whiskey and Blues with edgier songs like Jealous Kinda Fella and No Ring.

Bonner rejoined Waiters in 2006 for Throw Back Days, which also featured Vick Allen on keyboards and backing vocals. Like its predecessor, it charted on Blues Albums at No. 5 and on Top R&B/Hip-Hop Albums at No. 93. The title track, a smooth ode to old-school revelry, also reached No. 37 on the Adult R&B Songs chart.

Waiters’ 2010 Waldoxy album, I Ain’t Gone Do It, scored him his highest position on the Blues chart at No. 3. Bonner again contributed guitar work to the sessions, and Frederick Knight penned two of the songs, the lushly sensual Hold That Thought and the workingman’s lament Everything’s Going Up.

Other Waiters releases for Malaco include a greatest hits compilation, Got My Whiskey, on the 601 Records imprint. The song Got My Whiskey also appears on the six-disc collection The Last Soul Company: Malaco, a Thirty-Year Retrospective and Woman in Need on the two-disc version.

In recent years Waiters self-released several recordings and remained a popular fixture on the touring circuit with his dynamic stage shows, which featured a band complete with horns, backing singers and choreography. Though his songs celebrated the party life, he admitted to Living Blues writer Scott Barretta in 2007 that he didn’t “even drink alcohol . . . All of [my songs] are talking about Southern down home pleasures and because that’s who I’m really cutting this music for.” He was diagnosed with cancer in 2015, and died on May 28, 2015 at the age of 58, following a brief battle with the disease.