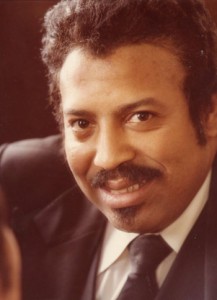 Born in Jackson, Mississippi, on December 25, 1934, Mitchell started in gospel as a youth and by age 16 was fronting the Jackson-based Hearts of Harmony. He continued to work in gospel during the 1950s until finally landing in Chicago in 1958 with hopes of crossing over into secular music.

He recorded his first sides for the tiny Boxer label in 1959 with Howlin’ Wolf’s guitarist Willie Johnson. In 1961 he played a demo of his song The Town I Live In for George Leaner, who was so impressed with the song he formed One-derful Records to put the release out. Released in 1962 the song was a national R&B hit and reached No. 8 on the charts. Mitchell followed with eight more singles with One-derful over the next three years but failed to match his initial chart success. His impassioned live shows, though, made him one of the top club acts on Chicago’s West and South sides.

During the early 1970s Mitchell recorded for several small Chicago labels including Big Bill Collins’ Black Beauty and Willie Dixon’s Spoonful and Big 3 labels. His 1976 cut Trouble Blues for Big 3 was a hit in the southern soul market and was picked up by Malaco Records and rereleased on their Chimneyville label. Malaco quickly got Mitchell into the studio and recorded a series of singles including the stunning The End of the Rainbow and a beautiful remake of The Town I Live In. In 1978 Malaco gathered the singles for McKinley Mitchell, a collection of 16 sides from the soul powerhouse. After returning to Chicago in 1985, Mitchell’s health began to fail and he died on January 18, 1986, at the age of 51. Following the vocalist’s passing, writer Robert Pruter proclaimed Mitchell as “a rhythm & blues artist of the first rank.”