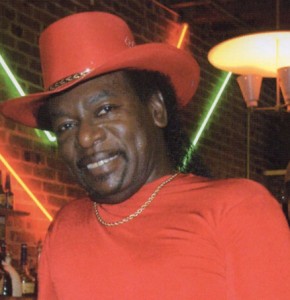 Believe it or not, it all started in church.

Marvin Sease, born in Blackville, South Carolina, in 1946, grew up singing gospel. He sang in church choirs, and eventually he picked up some guitar skills and began working as both a singer and fretman with groups like the generically named Five Gospel Singers, based in Charleston. During these years he supported himself with day jobs, but he was restless with ambition—he wanted to become a professional entertainer, and he was willing to “cross over” into secular music if that’s what it took. In 1961, he moved to New York to follow his dream.

Once in the big city, he again found himself singing gospel. He sang and played guitar with the Mighty Gospel Crowns and a Brooklyn-based group called the Gospel Knights, with whom he recorded a few sides in the mid-’60s. All the while he kept an eye out for other opportunities. He formed a Temptations-style vocal group with his brothers Charlie and Harold (according to some accounts, three of his brothers may have been involved), but he soon broke free and embarked on a solo career. Like many scuffling vocalists, he often worked without a band, performing to pre-recorded backing tracks, although he also remembered fronting an aggregation called the Soul Keys. He eventually landed a steady gig at a Brooklyn club called the Casablanca. He recorded a few 45 r.p.m.’s in the ’70s—on Double M, on his own Early Records imprint—and then, in the mid-’80s, he used another of his singles, Ghetto Man, as the title track for a self-produced LP, also on Early Records. That LP gained enough local success to bring Sease to the attention of a record shop owner with music industry connections; he, in turn, set up a series of discussions that led to Sease getting signed by Polygram. Polygram reissued Ghetto Man in 1987 as Marvin Sease, but with an important new addition—an extended outing called Candy Licker. That song, which had come to Sease in a dream some time earlier, and which he brought to Polygram on a self-recorded cassette tape just before they were ready to press the newly renamed Ghetto Man reissue, would soon hit the southern soul blues world with seismic force.

Admirers of Sease’s work up to this point must have been astounded—nothing he had done, and nothing else on this album, remotely indicated that such a thing might be coming. Ghetto Man itself was an aching, doo-wop flavored ballad that recalled the work of such master soul stylists as James Carr; other offerings, such as Let’s Get Married Today, Love Me or Leave Me and You’re Number One, were romantic fantasies obviously crafted for youth-oriented pop radio.

But Candy Licker, as the saying goes, was something else. “I’m Jody, baby!” Sease proclaimed, invoking the mythical backdoor trickster / Lothario. “I will lick you up, I’ll lick you down / Turn around baby, and I’ll lick you all around . . .” Set to an ironically romantic mid-tempo melody, Candy Licker ran for over ten minutes and featured a woman gasping and panting in the background along with extended quasi-sermons from Sease, in which he expanded on his theme in joyously profane detail. It became an immediate jukebox smash along the Southern circuit, and Polygram soon released a toned-down, edited version for radio play. Within a year or so, Sease found himself able to afford a band to back him up on his performances, which by then had become among the music’s hottest attractions. He released a series of follow-ups to Candy Licker, and he also worked up a show that was almost as explicit as the songs—when he wasn’t wagging and rolling his tongue with cartoonish lasciviousness, he’d spice up his act with stage props and gimmicks that allowed him to enact some of the fantasies his lyrics suggested. By his own account, women would sometimes get so excited by it all that they’d pass out.

Candy Licker and its kinky progeny typecast Sease forever as an X-rated party man, but he was also in command of more substantial gifts. Those early ballads of his remained staples of his in-person appearances, and he never allowed himself to be entirely constrained by the image that his better-known, latter-day hits had created. I’m Mr. Jody, from 1994, with its fervid opening sermon, was (and is) one of the most effective and influential songs in the soul blues pantheon of fables about Jody, the mythical trickster / home wrecker. (The prototype was Johnnie Taylor’s 1971 Jody’s Got Your Girl and Gone.) Sease’s ballads, although often overlooked in favor of his more explicit material, further revealed him as a soul man of depth and vision.

He continued to cultivate those gifts after he joined Malaco in 2004. His releases for the label—Playa Haters, his 2004 debut; Live With the Candy Licker, a combined CD/DVD in 2005; and 2008’s Who’s Got the Power—included the expected revisiting of Candy Licker territory (Pump My Juice and Everything You Eat Ain’t Good, both from Playa Haters, among others). But even more significant, in terms of a true appreciation of Sease as a soul singer, were offerings like Quiet As It’s Kept, a vintage-sounding, up-tempo message song celebrating reciprocal love; deep soul ballads like Denying Our Love and I’ll Take Care of You (a Sease original, not the Bobby Bland standard) and, perhaps most poignantly, the prophetic Gone On, which may be lesser known today than Johnnie Taylor’s Soul Heaven, but remains an equally moving tribute to departed musical greats.

Marvin Sease died on February 8, 2011, in Vicksburg, Mississippi. It’s safe to say that his passing represented the end of one of modern day blues’ most unique and important legacies. Countless others have attempted to recreate Candy Licker’s ineffable blend of explicitness and compassion (even at his most scabrous, Sease portrayed a man determined to please his lover, first and foremost), but few have pulled it off with Marvin Sease’s aplomb.