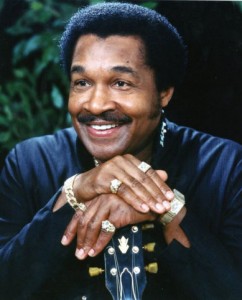 Little Milton was one of the most important blues artists of the mid- to late 20th century, and he was also one of the major figures in forging the latter-day stylistic hybrid that eventually became known as “soul blues.” His muscular baritone ascended effortlessly into a churchy wail; his supple string bends echoed T-Bone Walker and B.B. King, but he seasoned them with his own harmonic sensibility and knack of crafting sparse yet deeply expressive lines—in a Little Milton solo, the empty spaces between notes sang as eloquently as the notes themselves.

Milton was born James Milton Campbell on September 7, 1937, on Duncan’s Plantation outside of Inverness, Mississippi. According to Milton’s recollection, he originally fell in love with the guitar listening to the Grand Ole Opry on the radio. He also sometimes heard Louis Jordan’s syndicated radio broadcast, which helped expose him to bluesier and jazzier sounds. He ordered his first instrument from a Marshall Field catalogue and paid for it with money he’d earned working in the cotton fields.

One of Milton’s earliest musical mentors was guitarist Eddie Cusic, who lived in Leland and led a small combo. As a member of Cusic’s band and other local groups, Milton attained a reputation as one of the region’s hottest young fretmen. Greenville, the biggest city in the area, was home to a thriving country music scene along with its fabled blues jukes on Nelson Street, and Milton worked in these venues as well. Later in life he had warm memories of the comradery he enjoyed with the white musicians he met on those gigs.

In the early 1950s Milton traveled for a while with harmonica master Sonny Boy Williamson (Rice Miller); he also cut some sessions with Willie Love (Williamson’s keyboardist at the time) for the Trumpet label in Jackson, Mississippi. In 1953, Ike Turner brought him to Sun Studio in Memphis, where he released three records; an unissued Sun session, Running Wild Blues, was the prototype for That Will Never Do, which Milton recorded for Bobbin about five years later, and which has since become a modern-day blues standard.

After a brief detour to the Meteor label in Memphis, Milton moved to East St. Louis along with his band (which included the now legendary Oliver Sain on saxophone), and he soon became a leading light on the St. Louis area R&B scene. He signed up with Bobbin, where he did some studio work and released a series of sides under his own name. In 1962, Bobbin leased Milton’s So Mean to Me to Chess Records in Chicago, who issued it on their Checker subsidiary. It hit the charts and stayed there for five weeks. Milton’s We’re Gonna Make It, also on Checker, hit No. 1 in 1965, catapulting him into national recognition.

In the ’60s, for a blues artist to make the charts at all was notable. Even more impressive was the run of success Milton had: he charted 30 times between 1962 and 1983 on Chess/Checker, Stax, the Florida-based Glades label and MCA. In 1984, he began his tenure at Malaco, where he recorded 15 albums between 1984 and 2002. Milton’s Malaco output included some of the most important recordings of his career, if not some of the most important in all of modern blues: his anthemic single The Blues is Alright (which appeared on Playing for Keeps, his 1984 Malaco debut); his remake of Johnnie Taylor’s Little Bluebird (originally recorded for Stax, and included on Greatest Hits); his gold-standard version of the George Jackson composition Annie Mae’s Café (the title song of Milton’s 1986 Malaco release Annie Mae’s Café) and Strugglin’ Lady (another George Jackson classic, this one from Milton’s 1992 album Strugglin’ Lady) are only a few of the most notable. Other releases from the 1980s include I Will Survive (1985) and Movin’ to the Country (1987) that included the hits Room 244 from Milton and George Jackson and the Larry Addison–penned His Old Lady, and My Old Lady. The 1990s saw Milton releasing eight studio albums and one greatest hits collection on Malaco. Milton opened the decade with Too Much Pain (1990), which includes the Denise LaSalle–penned Your Wife is Cheating on Us and Reality (1991) with A Right to Sing the Blues. He followed with I’m a Gambler (1994) with a more straight ahead blues sound, Cheatin’ Habit (1996), Count the Days (1997) and 1998’s For Real.

Little Milton never wavered in his determination to grow, to expand his listenership and his vision. Some of his latter-day covers of pop songs—such as The Wind Beneath My Wings on Back to Back (1988) and My Way on Guitar Man (2002)—as well as his duets with rock and pop stars (most notably on Welcome to Little Milton in 1999) drew criticism. However, Milton remained unrepentant and unbowed, as these albums exposed him to a younger and wider audience. After all, he’d taken heat in the early ’50s for departing from the down-home stylings he’d been playing with Eddie Cusic and Sonny Boy Williamson, in favor of more urbane material. Through it all, Milton proudly wore the mantle of “bluesman.” He was also resolute in his determination that the blues should be seen as a music of uplift, as well as funky good times and soul-baring honesty. Milton always presented his music—and himself—with dignity; he was passionate about honoring the noble heritage he believed the blues represented. The same unbending current of pride, resilience and determination to tell the truth that ran through Little Milton’s music was an essential component of the man himself. Our lives have been immeasurably enriched as a result; Milton’s death in 2005 robbed the blues of one of its proudest and most gifted ambassadors.