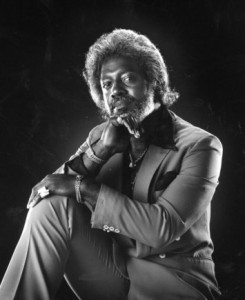 With his burnished baritone and penchant for yearning, emotional ballads that explore the complexities of romantic relationships, Benjamin “Benny” Latimore has been captivating listeners and audiences for decades. “I feel that it’s my responsibility to have some sort of integrity in my work,” he told Living Blues critic David Whiteis in the latter’s genre study Southern Soul-Blues. “I just try to tell the truth and what I see as the truth—maybe to cause you to think about something a little bit deeper.”

Born in Charleston, Tennessee, on September 7, 1939, Latimore’s parents were musically inclined, and he began playing the family piano as a child. He listened to blues, country and gospel on Nashville’s WLAC radio station and sang his first solo in the Baptist church when he was 13. After finishing high school, he attended Tennessee State University, but soon dropped out to focus on his music career. He spent the early 1960s performing with artists such as Louis Brooks and Joe Henderson, relocating to Miami after leaving Henderson’s band.

Latimore waxed his first recordings in the mid-1960s for the Dade label, owned by Miami record executive and producer Henry Stone. He later switched to Stone’s Glades imprint, and his first hit was a cover of T-Bone Walker’s Stormy Monday. Produced by Steve Alaimo and released in 1973, the single reached No. 27 on Billboard’s R&B chart. His first solo album, Latimore, was released the same year and in 1974 he scored a No. 1 R&B hit with his song Let’s Straighten It Out.

After several further releases, Latimore signed with Malaco Records in 1982. Singing In the Key of Love was his debut album for the label, and it notched No. 61 on Billboard’s R&B chart. Produced by Tommy Couch and Wolf Stephenson, it featured the Muscle Shoals Horns, and Carson Whitsett joined Latimore on keyboards. The tracklist includes the up-tempo Bad Risk, written by George Jackson and Robert Alton Miller, and Latimore’s own bold kiss-off Let the Doorknob Hit’cha.

His next release for Malaco was I’ll Do Anything For You in 1983. Guitarist Vasti Jackson joined many of the same studio personnel as the previous album, including producers Couch and Stephenson. Latimore remade his own 1974 smash Let’s Straighten It Out, turned out a swaggering version of Denise LaSalle’s Hell Fire Lovin’ and lent his soulful touch to the Don Cook / Rock Killough title track and Daryl Hall and John Oates’ Sara Smile.

Good Time Man followed in 1985, with Latimore producing alongside Couch and Stephenson. Six of the album’s ten songs were either written or co-written by Leonard Gibson—a pseudonym of Latimore’s.

Released in 1986, Every Way But Wrong generated another Billboard Hot R&B single for Latimore when the mellow Homer Banks / Lester Snell–penned Sunshine Lady peaked at No. 76. Stephenson served as producer for the sessions, which also yielded the torrid title track, written by Denise LaSalle with Larry Addison, and LaSalle’s smoldering ballad Put Out the Fire.

Slow Down appeared in 1988, and on this outing Richard Cason and Jimmy Lewis augmented Stephenson as producers. Lewis’ scorching title track, Slow Down (But Don’t Stop), is tailor-made for Latimore’s passionate vocals, as is Lewis’ Careful Man and Bob Johnson’s lushly beautiful All You’ll Ever Need. Other highlights are Latimore’s own sweetly earnest One Man, One Woman, One Love and his duet with Alfreda James on Cason’s You Still Make Me Feel Good.

Latimore’s 1991 release The Only Way Is Up put him back on the national charts, reaching No. 34 on Billboard’s Top R&B Albums. The moody single I Need a Good Woman Bad, composed by Steve Bassett, Larry Byrom and Randy McCormick, also made the Hot R&B Songs chart at No. 86. Cason, Lewis and Stephenson returned to produce the record, and the studio ensemble included the Muscle Shoals Rhythm Section and Horns, along with Dorothy Moore as a backing vocalist.

On Latimore’s subsequent album Catchin’ Up, Frederick Knight contributed production along with Latimore, Couch and Stephenson, and guitarist Will McFarlane supplemented the session veterans. Standout tracks on the 1993 set include Knight’s sensual Lay Another Log on the Fire, and Latimore’s bluesy version of George Jackson and Ray Moore’s I Smell a Rat. In June 2010 Catchin’ Up was chosen by Living Blues critic Jim DeKoster for inclusion on his list of Thirty of the Very Best Blues Albums of the 1990s.

The 1996 release Turnin’ Up the Mood saw Latimore move from Malaco to the J-Town subsidiary. Richard Cason produced the recording, and he also wrote or collaborated on eight of its 12 songs.

In 2000 Latimore returned to the Malaco label for You’re Welcome to Ride, his most recent recording for the company. Couch, Knight and Stephenson rejoined Cason as producers, and the Muscle Shoals Rhythm Section, Horns and guitarist McFarlane were among the musicians who reconvened for the sessions. Latimore is at his full-throated best on John Ellison’s uplifting You Can Count on Me, the Spooner Oldham / Dan Penn ballad Take Me (Just As I Am), the deeply grooving title track and the earthy I’m an Old Dog.

Latimore remains an active live performer and recording artist. In May 2014 he made a national TV appearance on an episode of The Tonight Show, sitting in with the Roots. His songs can also be found on All You’ll Ever Need, a compilation of tracks from his Malaco albums on the 601 Records subsidiary, and on the six-disc and two-disc versions of The Last Soul Company: Malaco, a 30-Year Retrospective.