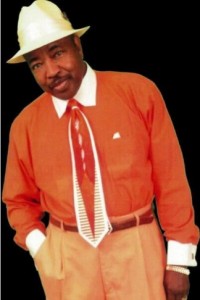 A vocalist, instrumentalist, songwriter and producer, Larome Powers was born Gerald Robinson on November 21, 1952. Originally from Tupelo, Mississippi, he moved to Ann Arbor, Michigan, when he was five years old. Powers learned to play bass and piano as a youth, and in his early 20s relocated to Detroit, where he spent a decade as a staff writer at Don Davis’ Groovesville Productions.

In the 1970s Powers toured the West Coast with such artists as Harvey Scales, Millie Jackson and Joe Tex. He became CEO of Super Disc Productions, later known as SGH&R, and also wrote songs for the April-Blackwood publishing division at Columbia Records.

After releasing four singles over the years, Powers issued his debut album, Somebody’s Chasin’ My Cat, on his own Blues Club International imprint in 2003. He was subsequently offered a contract with Malaco Records’ Waldoxy subsidiary, and What’s Life Without Love appeared on the label in 2006. This record featured two successful singles: the glossy dance number Shake & Shimmy, and the steamy ballad I Feel Like Cheatin’.

In 2011 Powers released the single Knockin’, with horn programming by Harrison Calloway. The sensuous, mid-tempo track was a hit, rising to No. 2 on the Soul & Blues Report’s National Top 25 Southern Soul Songs chart. His next full-length album, Stepping Out, followed in 2014. Also featuring Calloway’s horns, the songs included Knockin’, the passionate romp What’s the Name of That Thang and the sultry groove Older Man Young Thang.