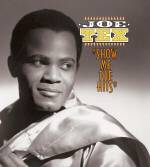 Hailing from New Brunswick, New Jersey, Jonathan Burton is a singer, songwriter, multi-instrumentalist and producer. As a youth he learned to play guitar from his father, a locally based musician, and gained further experience performing in his high school band and choir. After graduation Burton moved to New York, where in 1979 he crossed paths with the R&B vocal group the Manhattans. In need of a guitarist, they hired him almost immediately, and he remained with them for the next ten years.

While on tour with the Manhattans, Burton met Don Davis in Detroit, and worked with the producer on such projects as the Dramatics album The Dramatic Way (1980) and the Breakin’ 2: Electric Boogaloo soundtrack (1984). Burton later relocated to North Carolina, and his first solo recording, Undeniable, appeared on Kick-Quick Records in 1993, with A Little Music With a Lotta Soul following on Three Gems in 1997.

An encounter with singer Keisa Brown brought Burton to Malaco Records. The musicians met in the Carolinas, and afterwards Brown called producer Frederick Knight and recommended Burton to him. Knight signed Burton to his recently re-launched Juana label, and in 2002 he released Funky House Party. The dance-ready title track and the heartfelt Best Time of My Life both proved popular, providing Burton his first break into the southern soul market.

Now known as Sir Jonathan Burton, he continues to perform and work as a session musician and producer, as well as releasing several more albums on various imprints