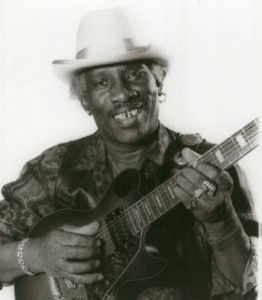 Alabama bluesman James Peterson was born in Russell County, Alabama, on November 4, 1937. Peterson’s father owned a juke joint, and the musical bug bit the young boy early on. He moved to Gary, Indiana, in 1952 and began to teach himself to play guitar. By 1955 Peterson had settled in Buffalo, New York, and was working at Allied Chemical.

On July 12, 1965, Peterson opened Governor’s Inn: The House of Blues in Buffalo, the first of many blues clubs he would run throughout his life. Peterson booked the big names of the day including Jimmy Reed, Muddy Waters, Howlin’ Wolf, Lowell Fulson, Junior Wells and many others. Over the years Peterson ran several other clubs including the Inn after Dark in St. Petersburg, Florida, One Stop Inn in Tampa, the New Governor’s Inn in Buffalo and Club 49 in Eufaula, Alabama.

Peterson made his first recording for Willie Dixon on the Yambo label in 1969 with his then four-year-old son Lucky Peterson. In 1970 he recorded his first full album, again with son Lucky, The Father, Son, and the Blues, for Perception. After several more recordings Peterson was signed to the Malaco subsidiary Waldoxy in 1995. His first disc, the critically acclaimed Don’t Let the Devil Ride was recorded at the Muscle Shoals Sound Studio with Peterson and Big Mike Griffin on guitar and includes songs from George Jackson, John Ward, Sidney Bailey and James Peterson, himself. His second disc for Waldoxy, Preachin’ the Blues, followed in 1996, again with Griffin on guitar but this time all ten songs were penned by Peterson. James Peterson died on December 12, 2010. He was 73.