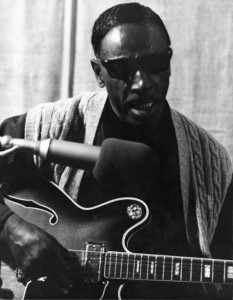 “My name is Fred McDowell. They call me Mississippi Fred McDowell, but my home is in Rossville, Tennessee. But it don’t make any difference—it sounds good to me, and I seem like I am at home here when I am in Mississippi. And I do not play no rock ’n’ roll y’all. I just play the straight, natch’l blues. And whenever you want to get somebody to play for you just call for Fred McDowell. I was raised on the farm you understand. The only way you can rock Fred, you got to put him in a rockin’ chair—lay me down you understand? That’s my type of rocking. And my type of blues, I plays with a bottleneck. I first got this style from a beef bone you understand me? Come out of a steak. My Uncle, when I was a small boy in the country, he ground this bone down and filed it with a file and put it on the little finger. But I put it on my ring finger you understand? This here bottleneck sound is better than the bone cause you get more kinda clearer sound out of it. And I would like for you whosever listening to me . . . who buy one of the tapes or albums or anything. I’d like for you to listen to what I am saying. I make the guitar say what I say y’all. If I say ‘Our Father’ it will say ‘Our Father.’ If I give out a hymn it will say it. If I play Amazing Grace it will sing that too. Now that’s my style when you hear me doin’ that. I hope y’all will like it whomever get it.”

Thus begins one of the great recording sessions to ever come out of the Malaco studios in Jackson, Mississippi.

Mississippi Fred McDowell was 65 years old at that session in 1969, and he was at the peak of his powers. Unlike many early bluesmen, McDowell had never recorded before being “discovered” by Alan Lomax in 1959. He was simply a local musician who also farmed and worked a day job at the Stuckey’s store and gas station at the Como, Mississippi, exit off of I-55. He played for tips at the store, played local parties and with his wife, Annie Mae, backed the gospel choir at Hunter’s Chapel Baptist Church. (A beautiful example of their gospel music can be found on Testament Records’ 1966 release Amazing Grace.)

McDowell’s stunning slide guitar work was influenced by early Delta Blues legends Charley Patton and Son House and was a major influence on dozens of younger players, most notably Bonnie Raitt. His repertoire included blues classics (Baby Please Don’t Go, Good Morning Little School Girl, Red Cross Store), gospel songs (Glory Hallelujah, Jesus Is On the Main Line) and songs he had written or adapted from early songs (Kokomo Me Baby, 61 Highway, Louise, Write Me a Few of Your Lines), all done in his distinctive, stinging call and response styled slide and propelled by his snapping bass lines.

I Do Not Play No Rock ’n’ Roll was one of the few country blues sessions ever recorded at the Malaco studios. Malaco Records was just two years old in 1969 and was about to ditch their original four-track studio equipment for a state of the art eight-track machine and new board. At this point the label had only released 45 r.p.m.’s with marginal success, but the idea here was to record a full album on Mississippi Fred McDowell.

Malaco co-founder Tommy Couch, while a student at the University of Mississippi, had booked McDowell several times. Couch’s then fraternity brother, current business partner and Malaco head engineer Wolf Stephenson, was impressed with the bluesman’s skills and suggested they try to record him. In November of 1969 they gathered in the Jackson studio to lay down the tracks. McDowell was backed by guitarist turned bass player Jerry Puckett and drummer Dulin Lancaster, formerly of Tim Whitsett’s Imperial Show Band. By this time McDowell had switched from acoustic guitar to the electric guitar and these recordings would be the first released with him on electric. The trio recorded 20 tracks, and after hearing them Wayne Shuler quickly agreed to put the album out on Capitol Records— McDowell’s only major label release. A shock to some blues purists, the more aggressive sound was easily embraced by young rock fans who had grown up on electric guitars, and it was an immediate hit. The album remains a favorite among blues fans and earned a five-star rating in the All Music Guide.

Fred McDowell died just three years after recording that groundbreaking album, on July 3, 1972, but he remains one of the most popular figures in blues history.