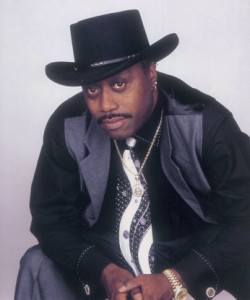 Vocalist Floyd Taylor is the son of legendary singer Johnnie Taylor and the heir apparent to his entertainment legacy.

Taylor was born on January 25, 1954, in Chicago. His mother, Mildred Singletary, raised the young boy in the church and in the church choir. A naturally gifted singer, he was involved in several bands while still in high school including a ten-piece ensemble called the Peace Band, a Kool & the Gang cover band.

In 1976, riding on the wave of the popularity of his hit Disco Lady, father Johnnie Taylor asked his son to join him as a back-up vocalist. Over the next two decades the younger Taylor was schooled at the side of a master showman and vocalist. By the time his father died in May 2000, Floyd Taylor had developed into a top-notch vocalist and entertainer in his own right, even winning the “Entertainer of the Year” award from the Chicago Blues Society in 1998.

Soon after his father’s death, Floyd Taylor signed with Malaco Records and released his first album Legacy in 2002 displaying a deep debt to his father’s vocal legacy while also showing a desire to expand his own personal style. He followed in 2005 with No Doubt and You Still Got It in 2007, prompting Living Blues magazine to proclaim “[Floyd Taylor] represents the best of mainstream contemporary soul/blues.” Taylor’s career continued to explode including headlining the Chicago festival in 2012 until he suffered a heart attack and died on February 20, 2014, at the age of 60.