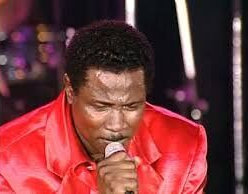 When his relative Ivory Joe Hunter told the young Ernie Johnson, “You have a beautiful voice,” the comment sparked a lifelong interest in singing. The briefcase full of cash that Hunter carried around with him didn’t hurt either. Ernie Johnson was born on April 4, 1948, near Winnsboro, Louisiana, a place Johnson called “real country, I mean one side of the sign said ‘entering,’ the other side said ‘leaving.’” As a young teenager Johnson refused to pick cotton, learning to drive the truck hauling the harvest in instead. But “Little Ernie” (who stands well over six feet tall) quickly grew bored with the farming life and took off for Dallas.

In the early 1960s he saw Lloyd Price perform in a local park and knew he wanted to have a band of his own. His first public performance came in 1964 in Greenville, Texas, when Johnnie Taylor cancelled on a bill that also featured Miss Lavelle White and Guitar James (with whom Johnson had caught a ride to the show). The pair encouraged Johnson to get up and sing as an opening act and he was a hit. The performance bug bit him so hard that night he quit his job at a local hospital the next day and dove head first into singing. Johnson’s voice is heavily influenced by Bobby Bland, Junior Parker and Sam Cooke, and like his mentors, he possesses the ability to hit the high notes.

Johnson began writing songs during this time and met local musicians like Cal Valentine and Al “TNT” Braggs who taught him how to be an entertainer. He also met songwriter Fats Washington—best known for his songs Black Nights (recorded by Lowell Fulson) and Pledging My Love (recorded by Johnny Ace, Elvis Presley, Jackie Wilson and many more) and his collaborations with B.B. King—who taught him how to craft his lyrics into real songs. Ernie Johnson cut his first record for Washington’s Movin’ Records in 1969, but when Washington died in 1970 the record was never released. Over the next 25 years Johnson, along with his band the Soul Blenders, recorded dozens of 45 r.p.m.’s on a series of small labels and built a reputation as a top-notch entertainer on the chitlin’ circuit.

In 1980 his song You’re Gonna Miss Me hit big and Johnson soon recorded his first full-length record Just In Time, released on Ronn Records in 1986. More hit records followed including Just In Time, Love’s On the Other Line, Dreams to Remember and Party Time. Ernie Johnson signed with Malaco subsidiary Waldoxy Records in 1995 and recorded what Johnson himself considers the best record he has ever recorded, In the Mood. The album, recorded at the Muscle Shoals Sound Studio includes the Heavyweight Rhythm Section and the Muscle Shoals Horns providing a mature, full sound that is perfect for Johnson’s vocals. With tracks written by Johnson, George Jackson, Larry Addison and Dennis Walker the release is one of the best southern soul records of the 1990s. I’m In the Mood For the Blues, Love’s On the Other Line and the beautiful track Cold This Winter all capture Johnson at the height of his powers. In 1998 Johnson released his follow-up on Waldoxy, Hot & Steamy (produced by Mel Waiters), which prompted Living Blues magazine critic Jim DeKoster to note, “Johnson has proven himself to be among the best of Bobby Bland’s many disciples.”