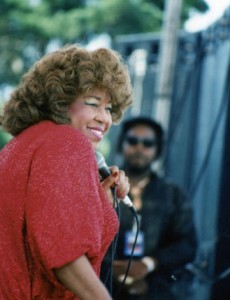 Acclaimed as a frank, sophisticated vocalist and a gifted songwriter, Denise LaSalle has earned the title “Queen of the Blues.” Born Ora Denise Allen in Leflore County, Mississippi, on July 16, 1939, she moved to Belzoni, in Humphreys County, with her family when she was seven. She grew up singing in church, listened to the Grand Ole Opry and John R.’s WLAC blues show and in the late 1940s witnessed Elmore James and Sonny Boy Williamson II playing for a radio broadcast in the window of the town’s Easy Pay furniture store.

As a teenager LaSalle relocated to Chicago, where she sang with the gospel group the Sacred Five and later performed in clubs around the city. She began writing stories that were published in magazines such as Tan and True Confessions, but she soon turned her attention to songwriting. In 1967 she released her first single, A Love Reputation, on Billy “The Kid” Emerson’s Tarpon label. After forming Crajon Enterprises with then-husband Bill Jones, LaSalle’s single Hung Up, Strung Out was picked up by the Detroit-based Westbound Records. Her Westbound single Trapped by a Thing Called Love topped Billboard’s Hot R&B Singles chart in 1971, reached No. 13 on the Hot 100 and was certified gold by the RIAA. Her debut album of the same name followed in 1972.

After several releases for various imprints, LaSalle signed with Malaco Records in 1982. A Lady In the Street appeared the next year, reaching No. 23 on Billboard’s Top R&B Albums chart. Produced by LaSalle, Tommy Couch and Wolf Stephenson, the backing musicians include the Muscle Shoals Horns, Carson Whitsett on keyboards and Frederick Knight on percussion. LaSalle’s own saucy title track and Don’t Mess With My Man, along with an X-rated version of George Jackson’s Down Home Blues, are album highlights.

Right Place, Right Time followed in 1984, and also charted on Top R&B Albums at No. 38. The album features many of the same personnel, along with guitarist Vasti Jackson. The title cut, written by LaSalle, is a passionate duet with Latimore, and her candid anthem Your Husband Is Cheating on Us was a popular soul blues radio single.

LaSalle and company continued their successful formula with the 1985 release Love Talkin’, which reached No. 67 on Top R&B Albums. Along with a sultry version of her song Someone Else Is Steppin’ In—a hit for Z.Z. Hill—the record contains her cover of Rockin’ Sidney’s My Toot Toot. Charting at No. 79 on Hot R&B Songs, the zydeco track was in demand overseas as well, where it hit the UK Singles Chart at No. 6.

Her next record, Rain & Fire, also charted nationally, rising to No. 48 on Top R&B Albums in 1986. The Muscle Shoals Rhythm Section augmented the Horns, keyboardist Whitsett and guitarist Jackson in the studio, and LaSalle, Couch and Stephenson again served as producers. LaSalle’s rendering of Phillip Mitchell’s confessional It Be’s That Way Sometimes is slow burning and moody, while Dip, Bam, Thank You Ma’am, written by George Jackson, Raymond Moore and Raymond Settle, is a funky delight.

It’s Lying Time Again was waxed in 1987. For this outing, producers LaSalle, Couch and Stephenson were joined by Larry Addison, who produced his songs Last Night Was the First Time and Your Pleasure Is My Business. LaSalle’s faithful version of Joe Tex’s Hold On is imbued with country soul, and her title track is a sassy, rocking romp.

Released in 1988, Hittin’ Where It Hurts returned LaSalle to the national charts, where it notched No. 61 on Top R&B Albums in 1989. Marvell Thomas joined LaSalle as producer, and the rousing Don’t Cry No More, penned by Deadric Malone, was a hit on southern soul radio.

Love Me Right charted once again for LaSalle, peaking at No. 73 on Top R&B Albums in 1992. LaSalle, Couch and Stephenson produced the set, which includes such spicy fare as the radio single Long Dong Silver, composed by LaSalle with Larry Addison.

The 1994 release Still Bad proved that LaSalle was just that, as she and her studio ensemble crafted another spirited collection of modern soul blues. LaSalle’s song The Bitch Is Bad is brassy and bold, and she handles Earl Randle and John Ward’s Right Side of the Wrong Bed and It Ain’t Over ’Til the Fat Lady Sings with her singular verve.

Smokin’ in Bed smoldered on the charts, reaching No. 10 on Billboard’s Blues Albums and No. 69 on Top R&B Albums in 1997. Richard Cason contributed production alongside LaSalle, Couch and Stephenson. The title track, co-written by LaSalle, John Jarrard and John Ward, is a blast of hard-rocking funk, and her ballads Goin’ Through Changes and Why Am I Missing You are deeply felt. Larry Addison’s Juke Joint Woman and the Earl Forest / George Jackson cut Blues Party Tonight celebrate good times.

In 2002 LaSalle signed with Ecko Records, and a series of albums followed. Of these, the 2007 release Pay Before You Pump garnered national notice, peaking on the Blues Album chart at No. 14. Produced by LaSalle with Malaco alum John Ward, his title track, It’s Goin’ Down, and Floyd Hamberlin Jr.’s Mississippi Woman were soul blues radio favorites.

LaSalle returned to Malaco in 2008, and the 2010 album 24 Hour Woman is her most recent release for the label. Luther Lackey’s Cheat Receipt, Robert Smith Jr. and Bart Thomas’ Older Woman (Looking for a Younger Man)—featuring a voice-over by Bobby Rush—and LaSalle’s ballad Let’s Make Love (Like It’s the Last Time) are all standout tracks.

Other LaSalle recordings available from Malaco include the compilation Trapped, issued in 1997 on the 601 Records subsidiary. Divas in the Delta–Live in Greenwood, Mississippi is a 2005 concert film featuring LaSalle and Shirley Brown, and Denise LaSalle–Greatest Hits was released in 2013.

The founder of the National Association for the Preservation of Blues, LaSalle lives in Jackson, Tennessee, and remains an active live performer. She was inducted into the Blues Hall of Fame in 2011 and became a member of the Rhythm and Blues Music Hall of Fame in 2015.